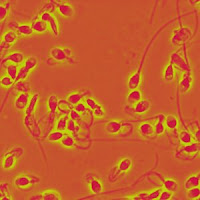 As Bastardette wrote earlier, the news out of Newcastle about lab sperm and its potential is repulsive and antithetical to the right of identity. We all know by now, to paraphrase BB Church, once something becomes institutionalized, it become normalized. Today “understanding sperm” will lead to a cure for male infertility for some. Tomorrow, it will be a handy source for making anonymous baybees for the entitled.

That aside, we knew it wouldn’t take long for the Save the Males Brigade to gouge out their brains over the thought of independent little swimmers making their way through the female reproductive system without on-site male mechanics to navigate the channel.

In his Culture Watch blog entry, Redundant Males, Redundant Humanity, born-in-the- USA Australian “family values” goody-two-shoes Bill Muehlenberg winges that Newcastle lab sperm and women who sell their eggs to science are about to make men “more redundant than they already are.” (my emphasis). Apparently Muehlenberg, an Australian Family Association poobah, views men as sex machines whose only job is to inseminate women–within the bonds of holy matrimony, of course. Once that job is gone, men are as worthless as an old piece of chewing gum stuck to the bedpost over night. Mrs. Muehlenberg, if there is one, should ask her husband to move the piano or clean the basement to give him a purpose in life outside of his blog. (For mental machosists reading this, go through Muehlenburg’s blog. He also believes that Western Christianity is a “Church in exile” held captive by the new Babylonian coalition of “radical feminists” Islamists, queers, and politically correct nannies. You might also check out the AFA’s definition of family. )

A number of problems come to mind, including the obvious: if scientists can now manufacture sperm, that simply makes males even more redundant than they already are. The social result is similar to what we get with parthenogenesis, or procreation by one sex alone. This might be good for amoebas, but it is not good for human beings, and certainly not good for the children who come about by such a process. Children need fathers, not just sperm manufacturers and donors.

Granted Muehlenberg goes into bioethical issues involving artificial-life creation, a couple legitimate, others not (“exploitation” of embryos) but overall his Inner Crybaby’s lament over the disgorgement of patriarchy by little swimmers is amusing and ultimately embarrassing. Talk about thinking with your dick!

CNS starts off by blither-blathering about the 2008 Canadian film mockumentary, The Baby Formula, produced and directed by Alison Reid and written by Richard Beattie, who collaborated previously in Succubus, (2006) a short featuring the same main characters in an earlier conception attempt. The plot of Baby Formula (if taken seriously) boggles Bastardette’s poor mind more than a hundred Little Orphan Esthers ever could:

A new Canadian movie tells the tale of two lesbians who become pregnant through in vitro fertilization. They use their own eggs — and sperm created from each other’s stem cells — making each the mother of their own child and the “father” of their partner’s.” 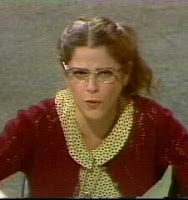 But then CNS says, Never Mind! The Newcastle research differs from this send-up and there’s really no connection between it and lab sperm except we wanted to trash women in general and uppity lesbians in particular. Well, nobody at CNS said the last half of that sentence, but that’s what they meant:

The difference between the researchers’ accomplishment – published Wednesday in the journal Stem Cells and Development – and the one depicted in the movie, however, is a significant one: Nayernia’s team was able to produce IVD sperm from stem cells with male (XY) chromosomes. When it tried to do so with female (XX) chromosomes they were prompted to form early-stage sperm, but failed to progress further. “This demonstrates to researchers that the genes on a Y chromosome are essential for meiosis and for sperm maturation,” they said in a statement.

What would Mary Shelley, who had her own issues with men trying to have babies, make of all this? It would certainly take more than a fortnight to work out.

I originally wanted to tie this all in to current adoption and ART secrecy and practice, but Bastardette hasn’t the time or energy today. That’s what bioethicists are for anyway It seems, though, that lab sperm and artificial wombs, which haven’t come up in this conversation at all (don’t they make women redundant?), are the obvious answer for all those people of various sexual and gender configurations and relationships who want to keep the origins of their mini-me’s a secret from the world and their replicants.

We’re confident that the adoption industry will find ways to integrate new repro technology and at the same time perpetuate its duty to child cravers and their secret lives. The industry has already made great strides in “adopting” embryos and surrogacy into their humanitarian aid package. Why not add artificial wombs (with the rent to buy option) and on-site artificial sperm manufacture (made to order, mix and match) and injection?

Below is The Baby Formula trailer.

2 Replies to “MORE REACTION ON LAB SPERM: I NEVER HAD SEX WITH …”