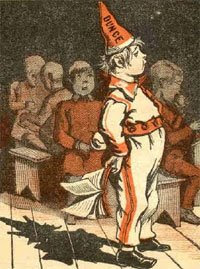 NOTE: I’m not here to argue which de jour term is appropriate, but to discuss how the misuse of language in a recent op-ed piece in USA Today can negatively affect public perception.

Al Neuharth posted a really annoying blog in Friday’s USA Today. (The media mogul is founder of the paper). In Little Caylee’s legacy: No child unwanted, Neuharth argues that the Caylee Anthony case “should help us focus on two prime human problems in our society:

Unless some new evidence develops, it’s apparent that Casey Anthony was a lousy mother. At best she’s stupid or crazy. At worst, evil. The press has widely reported that she wanted to put Caylee up for adoption and was pressured by her mother, Cindy Anthony, to keep her. For the record I believe that motherhood should be consensual and no woman should be forced, coerced, or pressured to either carry to term or to keep or not keep a child after it is born. The decision should be her responsibility and hers alone.

What annoyed me about Neharth’s piece was not so much the expected and irrelevant kneejerk adoption argument, but his unfettered misuse of the word “birth mother,” as in:

Her birth mother, 22-year old Casey Anthony, is in jail, charged with murdering her little girl.

Through HAL, those birth mothers are given educational, financial, legal and medical help.

Anybody who knows anything about adoption knows what a “birth mother” is, whether they approve of the term or not. An easy definition is found in Longman’s Online English Dictionary:

a child’s natural mother, rather than a woman who has become the child’s legal mother through adoption.

The parental rights of Casey Anthony were never terminated. Caylee Anthony was never placed for adoption or adopted; therefore, Casey Anthony is not a “birth mother.”

For some reason in the last few years “birth mother” has devolved from a specific socio-poliltical definition regarding child surrender to a mushy catch phrase used by the media and general public to designate any woman who gives birth. I see the term all the time outside of adoption, and am always taken aback when some prominent woman refers to herself as a “birth mother of four” when she obviously is not talking about her misspent life previous to becoming Mrs. Somebody. 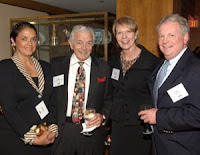 Neuharth isn’t the first journalist to misuse “birth mother,” and he won’t be the last. But unlike most reporters, he can’t play dumb, which is why I’m not giving him a pass. He and third wife, Dr. Rachel Fornes (couple on the left) have transracially adopted six children between the ages of 8 and 17. He is also father of two adult sons from his first marriage and the alleged father of the unacknowledged Rosamunda Neuharth-Ozgo, 45, who claimed in a 1987 book written with her mother, that her birth certificate lists Newharth as her father and that he sent her $100/mo until she was 21. (Here and here.) Fornes founded the not-for profit adoption agency Home at Last located in Cocoa Beach, FL. and she is a former board member of the National Council for Adoption.

Women–aka “good mothers birth mothers”–caught in the adoption spammer are praised by self-soothing politicians and win-win-win adoptionists for “doing the right thing” which to them can mean anything from carrying to term, forgoing the “option” of dropping the baby in the dumpster behind the mall, or letting the worthy take her bundle of trouble off her hands. Later, these “good mothers” are vilified by now cringing politicians and their anti-adoptee fellow travelers who fear their toxic visage especially (but not limited to) when bastards stalk the marble halls of the state demanding their records and identities. Without saying, “birth mothers good mothers” who show their Cruella de Vil faces at the statehouse, except to thank the bountiful state for the opportunity to “move on” from their disreputable pasts, are fortunate if they’re not booted out the door with a Scarlet A stamped on their bottoms.

By referring repeatedly to Casey Anthony as a “birth mother,” Neuharth, promotes an ugly political stereotype of women who have willingly or unwillingly surrendered a child to the adoption mill: cold uncaring women who if given their druthers will abuse, abandon, and kill were it not for the adoption industry’s ready rescue.

Neuharth’s designation of Casey Anthony as a “birth mother” may seem like a semantic quibble in the greater scheme of this horrible case, but it’s a big deal for those of us affected by adoption.

Neuharth has long supported abortion rights and the female autonomy those rights presume. Yet, by linking “birth mothers” (and the social concept of them, no matter what other term is used) to the likes of Casey Anthony, he perpetuates “birth mother” phobia, which has real political consequences for real adoptees stripped of their identity by the state, and real natural mothers stripped mined of their children. By linking Casey Anthony to “birth mothers” Neuharth is embedding deeper stigma and fear in the public and political psyche making our identity rights more difficult to restore and defaming the faux praised “good mother birth mother” in the process.

Neuharth’s piece is on the wire now and may show up in your local newspaper, though possibly under a different headline. You can comment on it at the USA Today link above.

36 Replies to “NOTE TO AL NEUHARTH: CASEY ANTHONY IS NOT A "BIRTH MOTHER" OR WHY LANGUAGE COUNTS”