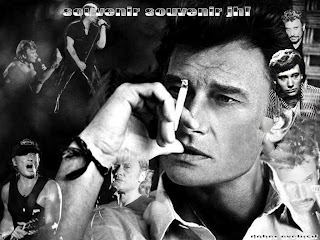 Vu Doc Long, head of Vietnam’s International Adoptions Agency has announced that French rock icon and notre rocker national Johnny Hallyday, 65, and his 5th wife, Laeticia Baudou, 37, have adopted a second Vietnamese child. The government declined further information such as the name and age of the girl or the name and location of the orphanage. An unidentified source said the girl was from a social welfare center in northern Vietnam.

No speculation yet on if strings were pulled to get this adoption going, though it’s reported the couple visited the French embassy on Christmas Eve.

In 2004, the Hallydays adopted Jade, 3 months old, from the Thanh Ba orphanage 40 miles northwest of Hanoi. That adoption caused a stir in France where the Hallydays were accused of line jumping about 350 waiting couples when Bernadette Chirac, wife of then French president Jacques Chirac, reportedly whispered the magic word “celebrity” in the ear of Vietnamese authorities.

The adoption was clearly fast-tracked. Jade was adopted and home in Gstaad 6 weeks after she was reportedly abandoned at the orphanage. In an interview with the magazine VDS, Baudou skirted around the fast-track. She denied the couple had been given special treatment and said they’d gone through the “usual nine months of checks by French social services including five home visits…,” but then claimed that Mme Chirac had raised the case for all waiting couples, not just theirs. “She may have speeded things up for us but those other, unknown families will also benefit from her stepping on the accelerator.” Baudou said she’d had tried to get pregnant for nine years and the adoption was well thought out. 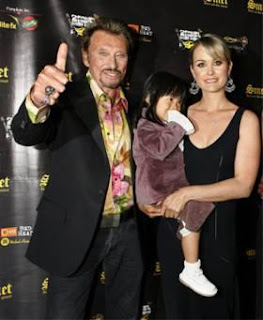 At the time of Jade’s adoption, the French government suspended adoptions from Cambodia due to allegations of child trafficking. One pap, protesting the block on his nearly completed adoption, went on a prolonged hunger strike. He wrote President Chirac : “Bernadette Chirac helped Johnny Hallyday and Laeticia adopt a child in Vietnam. Why not us?”

I was in France at the height of Hallayday’s fame. The guy was everywhere. I mean, he was on the front page of every paper. Johnny Hallyday all day every day. At that time he was married to his first wife, ye ye girl, Sylvie Vartan. They were known as rock n roll’s “golden couple.”

Hallyday and Vartan had one son, David now 42. who has three children of his own, 10, 13, and another born around the the time Jade was being adopted.

I can’t comment on the legality or ethics of this adoption. I just don’t know. But, there’s no fool like an old fool. Just ask Paul McCartney. What is Johnny thinking? It’s gotta be a wife thing.

Speaking of wives, here is Sylvie Vartan’s Zum Zum Zum which is what Hallyday has to look forward to in his golden years x 2.