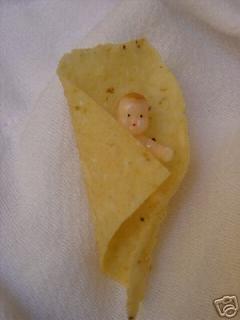 eBay has always been a safe haven (excuse me, I can’t help myself) for the weird, the bizarre, and the collectible. It’s the place where Bastardette regularly replenishes her Tsar Nicholas II icon, Ghoulardi, and Che Guevara collections. Being temporarily impoverished, however, she’s avoided even visiting the place lately, fearing an attack of conspicuous consumption that even a few bedtime readings of Thorsten Veblen couldn’t cure.

Due to a recent post on a private email list, though, regarding a certain peculiar adoption-related item (more about that in a minute), Bastardette ventured forth once more into the Land of Leisure Time Spending to take a look at what was being hawked under the guise of “adoption.”

A few years ago, eBay was a place to find genuine adoption artificats and curiosities. Once I purchased a page from the long-running Delineator series on adoption published nearly 100 years ago under the editorship of a young Theodore Dreiser. Then there were the “pagan adoption certificates” from the 1930s and 1940s issued by the Catholic Church (don’t ask!) Occasionally some interesting adoption books have been offered, including the much coveted Chosen Child and NCFA’s Factbook 3, a must for any adoptee rights activist. Usually, though, one was confronted with a collection of Precious Memories gewgaws, Greyhound adoption buttons, Christopher Radko Commemorative Christmas ornaments, and framed copies of that scary poem about two mommies.

Now there’s a whole new kitsch parade of items being sold by people to finance their adoptions–usually foreign. (There are too many to link. Just go over to eBay, type in “adoption” and play in the water.) Bracelets are big. There’s the “Adoption–Love for the Heart” bracelet; the “Glo in the Dark–I’m The Best Thing Made in China” bracelet; the “Adoption = Love” bracelet; and the “Red Thread” bracelet (various styles made from “New Jade” and does not “glo” in the dark.) If Lance Armstrong stylin’ isn’t your forte, try these out: The Cabbage Patch Boy in a Box (b. 1985–no shoes or socks, but he does have adoption papers, and he never grows up). Or a nice “Virgin Mary of the Adoption” ceramic art tile. Or an “Adoption Awareness” car magnet. Or an attractive weatherproof “Adoption is a Blessing from God”decal. (Tell that to 2-year old Nina Hilt who was beaten to death by her forever mom last week.)

PAPs take Spring (and Summer) House Cleaning seriously. We’ve got roadtoadoption-dot-com selling her Walt Disney pin collection; “Willowtreeconsignments” selling vintage tea towels and table runners; “johno7ka4 selling boys-sized t-shirts jeans, and an Old Navy winter coat; and jackdannyhannah selling a set early 20th century artist Maude Humphrey Bogart (Humphrey’s mother) knock-off collectibles, and a water filtration bottle they used last year in Kazakhstan. They’ve also broken into their record cabinet. Chubby Checker That’s the Way It Is/The Fly (45); and LPs: Clarence Carter Strokin’, Journey Captured (with posters), the self-titled, A Flock of Seagulls, the Partridge Family Shopping Bag, Night Ranger Midnight Madness, and a signed copy of the Doobie Brothers Best of the Doobies (without Michael McDonald). I don’t’ know how I’d feel if I learned my parents had been reduced to selling their Tommy Dorsey records to adopt me, but I could have done without some of that jumbo colonial furniture my mom acquired under the influence of Harriet Nelson.

All of which brings us back to the peculiar adoption-related item which started us on this shopping trip: “Chip Up for Adoption”,” which you might surmise is shown above. This “one of a kind” item, discovered apparently amongst the fish tacos at the seller’s favorite restaurant, is described as a “symbol of giving life–an adorable abandoned baby laying in a basket wrapped in a cozy, cuddly, crisp blanket” ie, the tortilla chip. And not only is it a symbol, it’s an omen. Divine providence! The day after this amazing discovery the seller’s sister-in-law left for China to pick up–what else? An abandoned baby! Who says irony is dead?

Unfortunately, Chip is under-appreciated. He (or is it she?) sold for only $1.25 with a $10.00 shipping and handling charge tacked on.

The safe haveners are obviously missing out on something here. Imagine what they could do with “Chip.” Genuine tortilla chips are obviously a bit fragile for the job, but with a little bit of plastic ingenuity Chip could be replicated as an awesome tool of safe haven conversion, much like the plastic fetus “pocket pals” (not to be confused with sex toys of the same name) that are carried around by anti-aborts to initiate discussions with those unlucky enough to be stuck next to them in airplanes or grocery store lines. Chip key chains, pendants, earrings, pins, barrettes, and of course, bracelets would follow. Glo in the dark optional.

And why should the safe haven gang do all the marketing? After all, they’re busy pulling baybees out of Dumpsters all day.

The solution is simple: Licensing. Third party income, is a no-brain opertation and is integral to the growth of any business as long as the product is right. And Chip is the right product at the right time. Just think about it. Chips in Tostida bags, tie-ins with Mexican restaurants. Turn in your Chip and register for an all-expense paid trip for 2 to Cancun! How about board and computer games? (who can adopt Chip quickest and cheapest?) A designer baby blanket line: plain, corn, tortilla, rojo, blue, or ranchero. Celebrity endorsements. Oh, and then there’s film, video, and TV. I mean, everytime you look at a tortilla chip you’ll think, “Don’t eat your baby, safe haven it.”

MGA could add Chip to their Bratzbabyz collection. Currently, Chip most resembles Chloe, but let’s not be ethnocentric here. It won’t take much for a makeover into Jade, Yasmin and Sasha.

Let’s not forget to diversify either. There could be a Chip in a Basket for the religiously inclined, Loogie Chip, the Garbage Pail Kid, and Chipper the…well Beanie Babies already has a Chipper. We’ll think of something.

The marketing opportunities are endless–and like the Jesuits, if you get a child early enough you’ve got her for life. Teach her by the age of 8 that’s it’s OK to abandon a baby, and she’ll do it 10 years later. Nobody will ever have to know. Chip told her so.

In a few years Chip could be as iconic to abandoned safe havend babies as Betty Crocker is to housewives and Morris is to cats. And when that happens Chip will be a hot collectable and resold on eBay at an inflated price. Just like real abandoned safe havened babies.