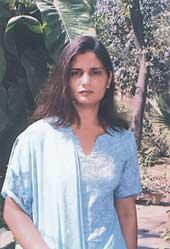 Dimple Menezes has quickly become Bastardette’s favorite dumpee. According to today’s Times of India, Dimple is going for the jugular. Her lawyer S.P. Chopra says his client, in a separate action, plans to file criminal charges against the Singhs under the Indian penal code “which offers seven years imprisonment to parents if a new-born is abandoned and left to the mercy of the unknown.”

Hungry dogs appear to qualify as a serious “unknown.”

“She threw me away. She did not feed me. Did she hold me? And then after 12 years she came to me. How can there be any love?” Dimple said in a phone interview. “My mother dumped me because she did not want to pay dowry for me and then she came to hurt me again when I wanted to marry the man of my choice.”

On the husband front, Mr. Menezes is currently working in Kuwait and can’t wait for this legal imbroglio to be over so he and Dimple can start over. “I want to end this pain…all this anger and move on in life.”

The Singhs, not surprisingly, are not available for comment.

Dimple’s suit, the first of its kind in India, is being brought under India’s Adoption and Maintenance Act which “makes it obligatory for birth parents to care for their children as well as the marriage of their female offspring,” says Chopra.