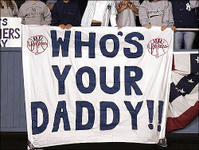 OK, adoptadogooders! (and you know who you are!) Time to get out your hankies, limber up your typing fingers, and put on your tinfoil hats. According to the July 17, edition of Digital Spy, Who’s Your Daddy is back. This time Daddy will be snuggled cozily amongst Temptation Island, animal attacks, COPS, and re-runs of Joe Millionaire on Fox’s new subscriber Fox Reality Channel. Just imagine, 24/7 reality. I know I can’t wait. I’ve already put in a big supply of popcorn and bought a new block of blank tapes.

Bastardette is no Pollyanna, even if she is adopted. She will admit that many of those who opposed WYD are friends and colleagues. She holds nothing against them personally for loathing the show and she hopes they hold nothing against her personally for loving it. Adoption can always do with a good send-up, especially a good kick in the sensitive spots, and sealed records and adoption anonymity is THE hyper-sensitive spot–at least to hear the adoptacrats at the National Council for Adoption (NCFA) talk.

Here’s the opening paragraph of NCFA’s letter to Fox from last December in which they prophesied the doom of adoption in America if the show aired. BTW, you need to read the whole letter to fully appreciate the terror facing the Red Power Tie crowd. As a bit of a wonky threat at the end of the letter, NCFA warns that if WYD airs it will harm the reputation of Fox Broadcasting. Apparently nobody at NCFA ever heard of I Want to Marry a Millionaire. I bet Fox president Peter Chernin pissed his pants.

On behalf of the Board, staff, and adoption agency membership of the National Council For Adoption (NCFA), I am writing to express our grave concern regarding the upcoming Fox television show, “Who’s Your Daddy.” We respectfully request that you not air this program. Its very concept–“guess your birthfather” game show, complete with $100,000 prize–exploits and trivializes adoption, and demeans the dignity of persons involved in adoption.

Well look who’s talking! Exploits? Trivializes? Demeans? I thought NCFA cornered the market on exploitation, trivialization, and demeaning years ago with its dismissal of adoptee rights as “mere curiosity” (one of their kinder contentions) and its excessive incessant pathologzing of adoptees, birthparents, adoptive parents, adoption professionals, and anybody else who happens to believe that adopted persons should be treated like everybody else. After all, if original birth certificates were open to adoptees as they are for the rest of the riff-raff, well…adoption would just cease to exist. Women would line up for blocks at abortion clinics (and probably beat up those baybee-bits Bible thumping “sidewalk counselors” while they’re waiting), we’d all be tripping over abandoned babies in the alley, adoptees and their families would need residential round-the-clock therapy, and adoptive families would just go pffftttt!!!!!!! in the night. After all, one can’t have more than one set of parents, can one? I mean, check out NCFA’s hyperbolic testimony on a current New Jersey bill– a bill jammed full of compromises and restrictions that only activists beaten down after 20 years would accept, to see just what a danger adoptees are to the great institution of adoption.

Such a policy [adoptee access to their records] would not only promote emotional and traumatic experiences in families, it would also send the corrosive message that adoptive families are somehow inadequate to meet the psychological needs of their adopted members. This message attacks a very foundation of adoption, that the adoptive family is the child’s true and permanent family. Adoptive parenting has provided untold social and familial blessings to children throughout the years. Law and society must continue to respect the adoptive family’s status as the adopted person’s true and permanent family, in order for those benefits to continue.

No doubt about it. The 6 million adopted persons in this country today are simply an army of Manchurian Candidates placed here to destroy The Adoptive Family. 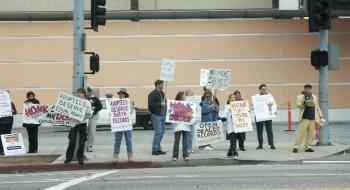 Manchurian Candidates Bastard Nation, CalOpen, CUB, and the San Francisco Adoptee Rights Project do Honk If You’re My Daddy! at Fox in Studio City, January 2, 2005, the day before the broadcast. Honk! created provocative action that placed “Who’s Your Daddy?” smack in the middle of the political landscape of the sealed records laws that created the show’s premise.

“Those of us who are adopted know that “Who’s Your Daddy” ain’t nothin’ next to the ultimate reality show: Adoption: Secrets and Lies where everyday normal, tax-paying citizens who just happen to be adopted face down the corrupt adoption system, negotiate a gauntlet of paternalistic and “protective” laws, hypocritical adoption agencies, do-good adoption “experts,” bored judges, insensitive bureaucrats, sell-out politicians, adoption trade lobbyists, religious zealots, and snotty records clerks that even the brightest program developers and Fox producers couldn’t dream up. What is more perverse? “Who’s Your Daddy” or a public policy that steals identities and locks up the birth records of adopted citizens for “they’re own good” and replaces them with forged documents.”

The exploitation, trivialization, and demeaning were bad enough for the industry and their more sensitive counterparts on the “progressive” side, but their fears only increased when they learned that WYD adoptee “contestant” TJ Myers turned out to be a busty star of B films (erroneously referred to as soft porn.) I guess adoptees are supposed to be dowdy and work in library basements; that is, when we’re not busy hacking up our parents (either kind) with axes. And even worse: a prize of $100,000 for guessing the right Daddy! How freaking exploitive is that? Boy, I wish somebody would offer me $100,000 to go on Fox and make a fool of myself–especially now that I’m getting back my svelte self after too many years of pizza, Taco Bell, and KFC delirium. With $100,000 I could buy a few politicians and get records open in at least one key state–California, New York, Ohio. Texas. Hey! Texas! That’s the ticket! Who ever heard of vote buying in Texas! Sounds like a plan!

And then the real horror. TJ’s adoptive parents were cut from the show. How rude of the producers! Rightwing media bozo Brent Bozell, III got especially exercised over that. Citing who else but Tom Atwood, NCFA boss man, Bozell wrote:

Atwood suggests that FOX’s (for some reason he capitalizes Fox) parental reunion ploy reinforces an erroneous idea that adopted people aren’t complete if they don’t solve the mystery of their birth origins. He says adoption is most successful when the society and the culture accept that the adopting parents are the true and permanent parents of an adopted child. Since FOX can cleverly manipulate any individual adoption story for a contrived happy ending, it can ignore the fact that searching for birthparents can be most hurtful to adoptive parents.

Here’s a thought. Maybe FOX…er…I mean Fox… could design a reality show built around YOUR dysfunctional family. Sort of Meet the Osbournes for white priviledged Anglo-Catholic Republicans. Remember the time your dad, Brent 2, Joe McCarthy’s speechwriter, grabbed a giant wooden cross and sledge- hammered his way into the George Washington University Health Center to protest abortions reportedly performed there? Or when your mother, Pat Buckley (Bill’s sister) attempted to rush the stage and punch-out radical feminist philosopher Ti-Grace Atkinson when she was speaking at Catholic University. Now that’s sure beats watching Ozzy ditz around Home Depot! I bet you wish you didn’t know where you came from and you don’t want anybody else to know where they came from either. Admit it Brent! You want to be adopted!

I understand NCFA’s reaction. After all, it’s a trade organization that wants to keep its factories looking squeaky clean and uninspected. And they most certainly don’t want adopted persons to be visible in the media, especially if they might be critical of the industry’s beneficent practices.

But on the other side–our side–the reaction was pretty weird–except for The Honkers. Nearly identical, in fact, to the industrialists. Moan, mutter, groan, sob, wring hands, weep, threaten, write letters, hold press conferences, send faxes, send emails, make demands, take 2 Lexapro, and start over. It was so darned Democratic Partyish. Snatching defeat from the jaws of victory, you’d think some of our friends had channeled Brent Bozell.

If adoption in the US is so great today how could a TV reality show harm it? Or is the real fear that if enough of the rot is exposed people will start to ask: is adoption worth saving?

It will be interesting to see if anybody raises a ruckus over the return of Who’s Your Daddy on cable. Adoption in the US is (excuse the triteness) alive and well and growing–something that all adoptionists know. So maybe they can just bop off a few Ommmmmmmms, chill out, and enjoy Who’s Your Daddy for what it is: low brow entertainment and a place where adoptees actually have a voice and a face.

Fox can’t destroy adoption. Only the institution of adoption itself can do that.