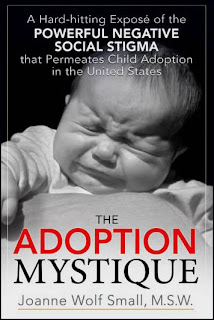 Good news!  The Kindle version of the adoption class Adoption Mystique by Joanne Wolf Small, has just been released. You can find Nook here.

By way of review, here is what I wrote about the 2007 re-issue with new material, of the original 2004 edition.

…a book that every adoptee rights activist needs to keep on the nightstand. I first ran into Joanne in 1980 when somebody gave me an article about sealed records and identities she’d written for a social work publication. It was from Joanne that I first heard the peculiar legal concept that the adoptee and natural parent(s) are “as if dead to each other.” That article stuck with me, and I credit Joanne in large part for raising my consciousness and bringing me into this strange adoptee rights “career” a decade later. But Joanne has done more than write. In 1980, she was the only adopted member of the federal Model Adoption Legislation Procedures and Advisory Panel (Model Adoption Act 1980). The panel’s sweeping recommendations, including unrestricted records for all adoptees nationwide, was a broadside on the secret adoption system. The report sent the industry into such a tizzy that Gladney formed the strong arm lobby, the National Council for Adoption, to “guarantee” that records remained sealed.

Adoption Mystique is an adoptee rights and adoption classic.

Joanne is a long-time member of Bastard Nation and a member of BN’s Legislative Committee.