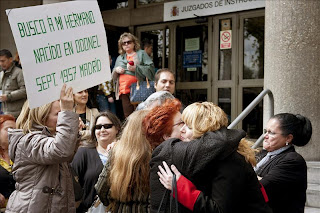 I‘ve been busy working on the new Bastard Nation webpage.  We lost quite a bit of material in the crash and burn, and I’m trying to reconstruct, but the more I get ahead, the further I get behind. At the rate I’m going it will be a year before it’s finished. (Note:  some paragraph breaks below are double, but there is nothing in the html to indicate why).

One of my tasks is beefing up the International page–the section that lists activist, search and support websites around the world.  I have added a category  for each country, when appropriate, on”child laundering,” covering news on sealed records, forced and illegal adoptions, and any other corrupt activity the state, private industry and church can devise individually or in partnership.

One of the latest scandals,  Los  Ninos Robados (The Stolen Children). involves  illegal child removal and black market ops  in Spain–a complicated decades-long collusion of government, law, Catholic Church, and private industry and individuals.   Although the current  scandal broke in the Spanish press in 2008, stories of  fraudulent adoption have circulated  in the press and public for years.  In 1982, for instance, nun and social worker Sor Maria Gómez Valbuena was mentioned in a baby selling investigation at a Madrid maternity clinic. The clinic was shut down, but with no prosecutions.  The 2008  accusations received little attention outside of Spain until recently when a government investigation was launched and the first indictment  made:  Sor Maria Gomez Valbuena, now accused by several hundred women of orchestrating the disappearance-by-adoption of their newborns,  decades earlier.  The nun refused to testify at her hearing.  Later she issued a statement saying she found the idea that a mother could be separated from her baby “repugnant.”  She had spent her life helping the needy in a “disinterested manner in accordance with her profound religious beliefs. Between 1967 and 1983, Valbuena reportedly handled about 3,000 adoptions a year. 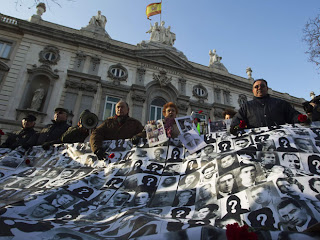 Sister Maria was not the only nun selling babies nor did she work in a vacuum.  Doctors, nurses, lawyers,  civil servants, and even morticians and cemetery keepers are under investigation.  A few days ago, the families of 69 “dead” children  requested a court in Malaga province to exhume their graves. In a related story, Randy Ryder adopted from Spain, reared in Texas, and now reunited with the woman he believes is his mother Manoli Pagador, says that other exhumed graves have yielded the remains of adults, animals, unrelated older children, and stones, but no newborns.  Some are empty.

For the last few weeks, the Spanish media has been full of  accounts of parents and adopted adults (many apparently did not know they were adopted until recently)  who have organized to expose baby stealing,  corrupt adoption practices, and to locate their broken families.  Meetings and protests have been held throughout the country, and every province has its own activist groups. I’m collecting the most relevant articles in English and Spanish about the investigation and posting links on the BN International-Spanish Los Ninos Robados page. 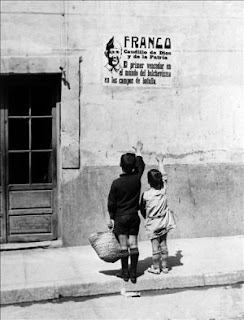 The best English language account of  Los Robados Ninos can be found  the December 26, 2011 issue of The Prisma: a Multicultural Newspaper: Children from the Franco Era…Landless, Homeless.  Putting baby laundering in the context of 20th century Spanish politics and history,  Ane Boras writes of how it all  began:


Deeply imbued with racist ideology, General Franco’s military faction considered single mothers, Republicans and prisoners to be unfit to look after and appropriately educate their children, and so the children were taken from them against their will and put in the hands of Christian families who were loyal to Franco’s way of thinking, who wanted children and who would guide them towards ‘true’ morals.


Many others were moved to convents to join a religious order, while some of those exiled during the civil war, particularly those in the Soviet Union, were forced by law to return to Spain as their paternal authority automatically passed into the hands of the State.  Therefore, there is no doubt whatsoever that the theft of children during this period, in which the Phalanx and the Spanish church played a vital role, had sown the seed for a child trafficking business which had already begun to materialise during the Transition and has lasted  until recent times.


Go here for more on the Franco government.


Of course, this isn’t much different from contemporary baby laundries in Argentina, Greece,  Israel and other countries  where children, usually newborns, were removed from political dissidents (especially Marxists and leftists), unmarried mothers, and  economic and social  “undesirables” for placement  in politically and religiously orthodox families, or in some cases, with non-affiliated  people who wanted children kept unaware of the children’s histories.


After Franco’s death in 1975, the scheme transitioned  into a less politically overt  but nonetheless  lucrative practice that lined the pockets of officials and the righteous egos of moralists. To complicate matters, until 1987, hospitals, not the government, regulated adoptions. Due to amnesty granted after Franco’s death, crimes committed during his regime are seldom investigated and regional prosecutors are forced to take each case separately.


Depending on the source some activists and lawyers believe that  between 1960 and the 1989 alone  as many as a 300,000 children–about 15% of all children adopted during that time period–-were transferred to new families illegally. As of this writing between 1500 and 3000  adoptions (again depending on the source), have been identified as spurious. About a quarter of the complaints brought so far have been dismissed because of  lack of evidence or documents, often due to forged documents and the lack of original birth certificates or because parties just can’t be traced. The Spanish government, after much foot dragging,  has set up a DNA database to help resolve  cases.

Numerous news stories on los ninos robados include first-person accounts of parents and adoptees in their search for their families and the truth.  One of the most detailed accounts is that of Luisa Torres and her daughter Maria Pilar, now reunited.


Luisa Torres  says she was first told by Sister Maria  whom she had gone to for financial and social support during her pregnancy,  that her baby had died at birth. “You gave birth to nothing,” she reportedly told Torres.  When Torres located her daughter in the hospital nursery and confronted, the nun:


You saw nothing,” the nun told her. Sister Maria dragged Torres back to her room and threw her onto her bed, Torres said. “I will report you to the authorities as an adulteress and you will go to jail. Then I will also take away your 2-year-old daughter,” said Sister Maria, according to Torres.

Torres says she was terrified. Inés, her first child, was the result of a failed marriage. Separated from her husband, she started a new relationship, but that man left her once she became pregnant. In a country that was still waking up from a 40-year dictatorship and was extremely socially conservative, Torres didn’t know that anti-adultery laws had already been repealed in 1978.
Maria Pilar (whom Luisa had planned to name Sheila, a name  Sister Maria to be  “unchristian” and renamed “Maria” after herself)” was adopted by Alejandro Alcalde and his wife l (no name given)  after the Madrid regional counsel advised them to contact the nun about adopting a child.  Since the adoption was handled through a public hospital, the Alcades did not suspect irregularities. When Maria Pilar was 15 her parents divorced and Maria remained  with her father. For the next 15 years Maria says  he “spent a fortune” on private investigators and lawyers  to find her mother.  When they approached Sor Maria Gomez Valbuena :

who had kept in touch with the adoptive parents over the years. “I swore to God in front of your mother that I would never reveal her identity,” she told Maria Pilar. “She was probably a drug addict or a prostitute, it would only hurt you to find her.”

The case generated publicity, and on June 30, 2011 Luisa and Maria Pilar were reunited  (with DNA) on El Diaro, a TV show  which had been covering the los robados ninos story for years.

Although there is no mention of secret adoption (on the part of the Alcaldes) an adoptive mother in another case explained during the investigation that Catholic clergy advised her to keep the adoption a secret:

Inés Pérez, 89, has confirmed that a priest encouraged her to fake a pregnancy so she could be given a child due to be born at Madrid’s San Ramón clinic in 1969. Her adopted daughter, also called Inés, was among those demanding an investigation.
******

The current activist movement was kicked off by Antonio Barroso, who discovered in 2008 that he had been purchased on time payments from a nun in Zarogosa.  Verifying through a clandestine DNA test he determined that he had no biological connection to the woman he had always believed was his mother, and she later admitted the cover-up.  In 2010 he and his  lifelong friend  Juan Luis Moreno,  purchased at the same time by Barroso family acquaintances, founded The National Association for Victims of Irregular Adoptions (ANADIR)  By  October 2011, more than 1800 people searching for biological relatives had joined. At that time, an ADADIR DNA bank had reunited five families. ADADIR, headquartered on the Catalan coast  has set up chapters across the country.

Another group, SOS Bebes Robados has a network of organizations throughout the country (the website links to them all) and has been prominent in protests and demonstrations as well as search and support.   A coaltion of activist organizations called “ association all stolen children are also my children” has splintered already  over the issue the government involvement in family reunification, and SOS Bebes has left ( The source of this inmation is  appears to be machine translated, and this is what I think it says.  I can’t find a regular English-language article  or an organization website to  verify this or the coalition.)