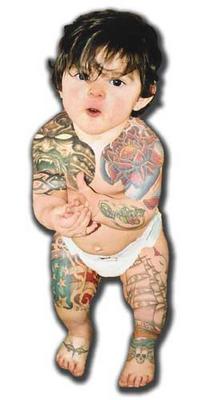 How do you spell hypocrisy?

Baby Dump lover Illinois Governor Rod Blagojevich has sunk deeper than lowest depths of Lake Michigan–if that’ s possible. On August 10 he vetoed a section of HB 29 which would have reduced the legal age in the state for getting tattoos from 21 t0 18.

Now what does this have to do with adoption?

In a press release issued by the governor’s office, Nanny Boy Blago declared that Illinoisans between the ages of 18 and 21–especially his daughters– incompetent to make their own decisions regarding what they can and cannot do with their own bodies:

As a parent, I don’t want my daughters to rush to get tattoos on their 18th birthday. At that age, most kids are still in high school and dont’ have judgment or perspective to decide on something as permanent as tattooing your skin. Teenagers may not realize getting a tattoo is a decision they’ll live with and potentially regret the rest of their lives That’s why I refuse to support legisation that allowed a teenager(s) to get tattoos.”

Well who cares what you think, Blago! You couldn’t wait to ink HB 175, the bill that removed the sunset provision from Illinois Safe Place for Newborns Act 2 years early; thus making newborn abandonment legal in the state forever–no questions asked at any age. All teens need apply!

In BlagoLogic it’s better for his daughters to get knocked up, keep it secret, have no prenatal care or counseling, give birth in a bath tub in a cheap motel in Cicero (or better yet, the Executive Mansion), and drop it off at an ER so he’ll never have to know… than get a tat they might regret for the rest of their lives.

In BlagoLogic it’s better for his daughters to risk life-threatening pregnancy-related disabilities including infection, breech birth, placenta previa/acceta (which can require a C-section delivery), preelampsia, toxemia, pregnancy-induced hypertension, hyperemesis. post-partum depression, or psychosis…and death… than get a tat they might regret for the rest of their lives.

In BlagoLogic it’s better for his grandchildren to suffer from cerebral palsy, mental retardation and delay, blindness, diabetes, and hyperlipidemia, short life spans..and death…than their mothers get a tat they might regret the rest of their lives.

Please someone! Why must the state protect teenagers from getting tats, but encourage these same teenagers to have a secret pregnancy delivery, and relinquishment?

Brendan McCarthy in the August 10 Trib points, out, at the age of 20 Illiinoisans can buy cigarettes, buy a home, carry a firearm, run for political office, and enlist in the military. According to icasualities.org, as of today, 76 Illinois soldiers–all voluntary enlistments– have died in Iraq. While no ages are listed, certainly some of these volunteer soldiers were under the age of 21. They no doubt regret joining up, that is they would regret it if they were still alive. Should we expect Blago to propose legislation then to ban military enlistment for under 21s to protect them from the War Party and from something they might regret for the rest of their lives? I won’t hold my breath.

By the way. Blagojevich’s daughters are only 9 and 2. Perhaps he has trouble picturing them as adults. But if he did, would he really want them to use the safe haven law? Did he ever even think about it?

3 Replies to “TATTOO U: BABY DUMP YES! TATTOO NO!”