Well, this is interesting!

In yesterday’s entry on the World Association for Children and Parents involvement in the Artem Saveliev case, posted directly below this, I wrote that WACAP is a member of the adoption trade association the National Council for Adoption. NCFA’s membership list, I noted, was not online when I checked right before posting. Actually, I was pretty sure I’d seen the roster a couple days earlier when NCFA’s new webpage was launched. It turns out I was right. The membership roster was online. THEN. And it is online. NOW. But not yesterday afternoon, when it appears that a NCFAnoid was busy scrubbing the site clean of WACAP membership.

Super sleuth and longtime NCFA watcher JoAnne Swanson took screen shots of the NCFA Washington State roster before and after the cleansing. (Click on the images below to make them larger). And if you don’t believe me, go to today’s NCFA membership site. 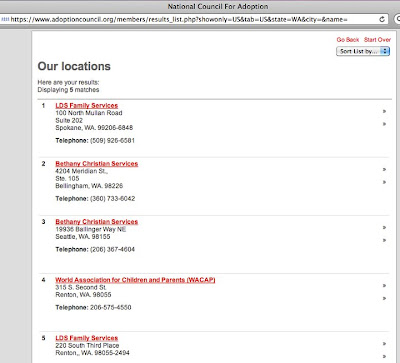 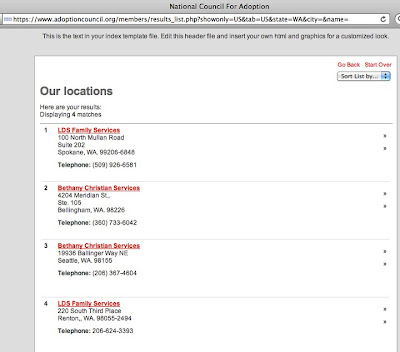 This doesn’t mean that WACAP (so far) is gone from NCFA, but that NCFA has sent if off the island to distance itself from their member. WACAP membership, as of this writing, is still posted on the JCICS site.

While we’re at it, we were greatly amused by NCFA’s press release on the Artem Saveliev/Artem Justin Hansen case; re: its statement on child abandonment (still not online):

“Child abandonment of any kind is reprehensible,” says Chuck Johnson, acting CEO of the National Council For Adoption. “The actions of this mother are especially troubling because an already vulnerable, innocent child has been further victimized.”

Oops! The country’s baby dumping “safe haven” laws, which let parents “legally abandon” newborns with no questions asked, were godfathered by NCFA’s founding president the late Bill Pierce while still at NCFA. I guess it’s different when its your own. Thanks for the great quote, Chuck! We’ll be using it.

Thanks to JoAnne Swanson for permission to post screenshots.