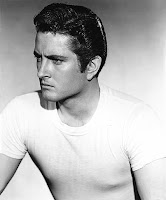 Robert : When you adopted me dad wanted a boy. You wanted a girl You got neither.

Mother Manners: You’re all the daughters and all the sons I never had.

Is there anything better than a psycho adoptee killer?