NCFA continues to change its face to the nicer and kinder.

This morning the National Council for Adoption announced the appointment of Mary Fasenmyer Robinson its new president and CEO. She replaces NCFA VP Chuck Johnson, who has served as acting president since the resignation of Tom Atwood last November. 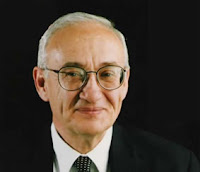 Robinson, with her background in development, marketing, finances, and philanthropy, (ie, $$$$$$$) appears to be the biggest step yet away from the bastard busting of its pathological founding mission and Piercian brand of realpolitik. Bill Pierce (right), who never met a bastard or parent (first or adoptive), that didn’t need a good slap down and smearing, should be spinning in his grave– if he had one. Bastardette warned Dr. Pierce that calamity would befall NCFA after his passing, and, well…he said that was NCFA’s problem, not his. 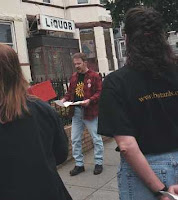 We personally, miss the cowboy days. A corporate NCFA is not a fun NCFA. Except for its weird association with Texas Christian’s Dr. Karyn Purvis, the attachment lady who equates wheeling a kid around the store in a grocery cart with child abandonment, NCFA hasn’t been much fun since Bastard Nation shut it down during its In Belly of the Beast rally, (and here ) and Dr. Pierce, regarding obc access, lamented to the Washington City Paper: 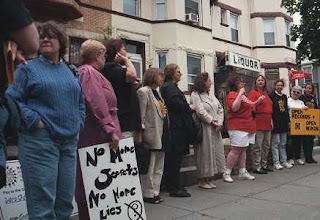 Below is the full text NCFA’s press release. We haven’t had time yet to check out Robinson, including her view, if any, (we’d love to talk to her) on obc access and what direction NCFA will take, but we will.

Alexandria, VA – Mary Fasenmyer Robinson of Bethesda, Maryland has been named president and chief executive officer of the National Council For Adoption (NCFA). The announcement was made today by board chairman Stan Swim, noting Ms. Robinson’s extensive experience in nonprofit development, strategic marketing and software innovation.

“We are extremely delighted and proud to announce Mary Robinson as NCFA’s new president and CEO. NCFA was founded on the unwavering belief that all children deserve a loving, permanent family. I am confident that Mary possesses the depth of leadership experience, marketing expertise and passion for adoption, as an adoptive parent herself, to lead NCFA through a period of continued growth, and to keep us focused on our mission of finding families for all children,” Swim said.

Most recently, Ms. Robinson has served a range of nonprofit organizations as the founder and president of Capacity Partners, Inc., a well-respected Bethesda-based consulting firm specializing in philanthropy and nonprofit management services. Prior to establishing Capacity Partners, she served as president of ES Solutions, a former technology division of Marts & Lundy, national consulting firm for philanthropy in Lyndhurst, New Jersey. She has also held executive management positions for Bentz Whaley Flessner in Minneapolis and Wealth ID division of Thomson Financial Services in Rockville, Maryland. She was co-owner of DataPlus in Bethesda, director of development for the Washington International School in Washington, DC and Middle School head of the Notre Dame Sion Lower School in Kansas City, Missouri.

“I am honored to be named president and CEO of the National Council For Adoption,” Ms. Robinson said. “Hundreds of thousands of children around the globe are desperately in need of permanent families, yet we are witnessing a general decline in both domestic and intercountry adoption. NCFA, as one of the nation’s leading adoption advocates, can play a pivotal role in helping these children find loving homes. As an adoptive parent, I know first-hand the joys and challenges of adoption, as well as the awesome responsibility that goes with parenting. So I am approaching this assignment with the vision of an executive and the compassion of an adoptive mom.”

In her new role at NCFA, Ms. Robinson plans to stay actively involved in professional circles and community services. She was recently selected to participate in Leadership Montgomery in Montgomery County, Maryland, and she is a long-time peer reviewer for Maryland Association of Nonprofit Organization’s “Standards of Excellence” accreditation program. She has served on the board of trustees at the Washington Waldorf School in Bethesda and the Friends Community School in College Park, Maryland. She was selected to serve on the Montgomery County, Maryland Technology Investment Fund and is a member of the Association of Fundraising Professionals. She is also a frequent speaker at professional organizations.

Ms. Robinson graduated Phi Beta Kappa from Brown University prior to earning a Master’s Degree from the Harvard Graduate School of Education. She lives in Bethesda, Maryland with her musician/songwriter husband and two teenagers.

NCFA is committed to serving the best interests of children and believes every child has a right to a loving, permanent family. Through research, education, and advocacy, NCFA provides adoption information to the general public, promotes ethical adoption practices, informs public policy and opinion leaders about adoption issues, and serves as a resource for women with unplanned pregnancies, adopted persons and their families, those seeking to adopt, and adoption professionals.