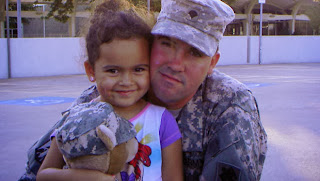 This morning  Dusten Brown showed his stuff as a father and a man.  In a press conference in Tulsa he announced that he and the Cherokee Nation will no longer pursue custody of  his 4-year daughter Veronica Brown:. His sad surrender was done not as a sign of defeat but of love for Veronica. He surrendered to save her from further confusion, pain, and public intrusion:.

Brown, said in his statement:

The most difficult decision of all was to let Veronica go with Matt and Melanie Capobianco last month. But it was no longer fair for Veronica to be in the middle of this battle. It was the love for my daughter that kept me going all this time. But it was also the love for my daughter that finally gave me the strength to accept things that are beyond my control… …And to Veronica—one day you will read about this time in your life. Never, ever for one second doubt how much I love you, how hard I fought for you or how much you mean to me. My home will always be your home, and you are always welcome in it. I miss you more than words can express. You will always be my little girl, my princess, and I will love you until the day I die. I love you and hope to see you soon.

The complete statement is  posted on Indian Country. 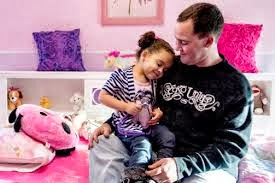 I have not written about the Veronica Brown case, and  I congratulate the dozens if not hundreds of people who have written splendid commentary. All I can offer in my defense is that I became so angry and inarticulate at the destruction of the Brown family that I just couldn’t write about this horror show without sounding like an hysteric.

The adoptee rights fight I’ve been in for 30 years or more has been 90% political,.  And you can’t say that the fight for Veronica hasn’t been political. But it is also emotional. I’m sitting here in the Ohio Union at the Ohio State University crying as I read Dusten’s statement.. Crying over the mutual loss of Veronica,  Dusten and her family, but also the tears of our collective loss. A little girl, like many of us, has lost her family for no reason other than the greed of privilege. She had a family that loved and wanted her. I ‘m’ crying because adoption crazies, cut Veronica in little adopta-bits.  I am crying because they won this fight and the expense of a powerless 4-year old.  They have no shame.

But it’s a Pyrrhic victory. Someday Veronica will know and  understand what happened to her and who did it and why they did it. The Capos may very well love Veronica  (though at the moment she seems more like a much loved vase or antique desk) and she may end up loving them back. But what will she think of those who used her as a political pawn in their own agendas: Nightlight (the crackpot adoption agency that brought us frozen embryo “adoption,”) politicians,  judicial cronies, racists, evangelicals, Tea Partiers,  PR flacks and media hacks. Pulling the strings behind this cozy coalition were  domestic neo-imperialists intent on destroying  tribal sovereignty and stripping  Indians of  long fought legal  recognition, protections such as ICWA, and natural resources–including children.

Make no mistake. There’s big money involved  in Veronica’s case, bigger than the adoption industry could cough up..Commercial genocide. We won’t kill you.  We’ll just obliterate your land, your resources, and your families.The destruction of ICWA is just cog in the killing machine.  I hope someone with more expertise in Indian affairs and time than I have will investigate the man behind the curtain.

While the Capos hired PR flacks, media hacks,  big bucks lawyers, and pimped sympathy from  baybee-obsessed  paps. clueless adopters, and sentimentalists,  Dusten, his family, supporters. and the Cherokee Nation  virtually unfunded in comparison held their ground with honesty and class. The Capos had a chance to walk the high road a long time ago.  Instead they took the  low road and got the kid.  Dusten didn’t. He held his head high.  He remains bloody but unbowed.

According to press reports Dusten hopes that some sort of “open adoption agreement”   will be made that will enable him  to continue a relationship with Veronica. The Capos made similar sounds in the past. I’m  not hopeful.  The Capos, through their actions, including their recent attempt to sue  the now Veronicaless Dusten for half a million dollars, give little confidence. Moreover, South Carolina does not recognize open adoption,  They could work something out on their own that would be unenforceable, but then I have bridge to sell you, too.

If any good comes out of this perversion of justice it should be public awareness that adoption business in the US today is rooted in greed. It’s is not about finding a family for a child who needs one, but acquiring a child for a  family that “needs ” one. .At any cost. If it can happen to Dusten Brown, a decorated Iraq War veteran, it can happen to you.

The Veronica Brown case is the face of  adoption in the US today.

The best rundown on the case comes from Daily Kos blogger ladijules, Adoption Series Part 2 – Veronica Brown  I also recommend Indian Country,  Indian News Network, Dusten Brown’s Keep Veronica Home webpage, and Standing Our Ground for Veronica Brown (supporter page) on Facebook..  The unpleasant Capo  Save Veronica Rose   (from who and what?) may go away soon.

TWITTER:   Twitter fried my account and I was forced to start a new one.  Besides tweeting The Daily Bastardette I tweet  (and retweet) about adoption issues, civil rights, freedom of the press,  the corporate state,  Depeche Mode,  literature and books, plus some local stuff.  I retweet generously.  Join me there! Daily Bastardette @DBastardette.

10 Replies to “Bloody but Unbowed: Dusten Brown Shows His Stuff”