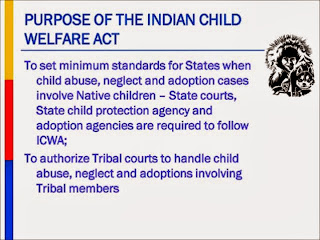 Last night Daily Bastardette received this comment on Bloody but Unbowed: Dusten Brown Shows His Stuff.  regarding the new attempt to dismantle the Indian Child Welfare Act (ICWA).  I believe it is too important to leave in comments and am giving it its own space to receive more attention.. The only change I have made is the addition of links.

Hi. I really like your editorial. I found this about the Capobianco’s PR team and its head Jessica Munday. Munday is apparently on the anti-ICWA campaign trail:

“Jessica Munday is owner of Trio Solutions in Mt Pleasant, SC, the PR firm that launched an anti-ICWA campaign on behalf of adoptive Baby Veronica parents Melanie Duncan and Matthew Capobianco. Munday recently sent an email to all Capobianco supporters who signed a petition to abolish ICWA. Here’s what she said,

While Congress has yet to amend the ICWA, our collective effort surrounding Veronica’s case will indeed help ensure this situation will not happen to another child. As a matter of fact, it already has. We have been informed her case has already been used in several cases to block similar travesties from occurring…. If anyone would like to continue advocating for children being hurt by the ICWA, please connect with the following groups.”

Coalition for the protection of Indian Children and Families
[email protected]

Maybe we should thank Munday for informing us of these anti-ICWA groups. [email protected]
–Tim H.

*******
This email, though no surprise is still alarming. ICWA has been in the crosshairs of the adoption industry long before it became law. The last major attack that I remember was in the wake of the Rost case about 20 years, though I believe there have been smaller skirmishes since. Bill Pierce, founding president of the  National Council for Adoption  (NCFA) was a chief opponent.  He  claimed the measure was racist, granted “special rights,” (ie, discriminated against white paps) and prevented Indian women from choosing adoptive parents for their to-be relinquished children.  Pretty ironic since Pierce opposed identified adoptions (I want to make it clear that the current current NCFA administration does not hold Pierce’s views.).

Back in  the 1990s when Sen. John McCain,  major promoter and defender of of ICWA, was floating a presidential run  he and Dr. Pierce had a shouting match, instigated by Pierce, over  ICWA at a political event in Arizona with Pierce accusing adoptive father McCain of being anti-adoption,

In another dust-up, McCain reportedly physically removed Dr. :Pierce  from his Senate office during an unpleasant ICWA discussion..
(I’m not at home at the moment and can’t find my hard copy documentation on the Pierce stories.  If I locate them I’ll amend this entry with links or sources.  I have no documentation on the office dust-up but heard about it on good authority.).

I’m doing some major backgrounding  on the “christian orphan movement”  which is front and center in the anti-ICWA drive. This afternoon I came up with this on the Citizens Equal Rights Alliance from the  November 1, 2011 issue of Native American Times:

The leading Indian hate group these days is the Citizens Equal Rights Alliance (CERA). Dave Lundgren, an attorney, calls them the Ku Klux Klan of Indian Country.  It’s sister organization the Citizens Equal Rights Foundation  (CERF) in 2002 held a  Mother’s Day Conference in Washington called “Confronting Federal Indian Policy. “CERF  at about the same time filed an amicus curiae brief with the Supreme Court in US v Lara calling for the Court to find that Congress has no power to recognize the inherent powers of tribes.

I plan to contact John McCain’s office next week.

Anyone seriously interested in the attempt to dismantle ICWA should “like “anti-ICWA FB pages  such as those listed above, and check them out on Twitter.  I have, distasteful as it is.

Finally, the anti-ICWA team at the moment appears to be spearheaded by outlier christian ministries and organizations, though no doubt has some mainstream adoption industry support.  I had planned to add some thoughts about what I consider the New Adoption Movement  and its agenda,.  Run by evangelicals,these outliers  over the last five-plus  years have co-opted the shaky mainstream industry,  turning it into something worse than it already was. My comments were too unorganized and unwieldy to throw in,  however, and there is still much sourcing to do.  It will show up eventually.

4 Replies to “The War on ICWA: Forces growing to dismantle ICWA and Indian sovereignty”