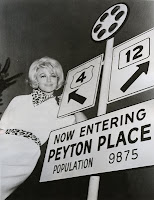 Peyton Place, the book, the movie, the TV nighttime drama, is all about repressed sexuality, illicit sex, bastards, and unwed mothers. I love it. I can still see TV Allison (Mia Farrow) running downstairs each morning on her way to school, kissing the magazine cut-out of her “father” that her mother Constance MacKenzie had so lovingly framed and placed on the mantle. The dead war hero. Hmmm, not exactly! Connie has issues, but they’re for another time.

Then, there was Betty Anderson (Barbara Parkins) and Rodney Harrington (Ryan O’Neill), small town beauties made for each other, except… Rodney the rich boy and Betty, the not quite from-the-other side-of-the-tracks but low enough on the social ladder to be unacceptable. (Adding to the lovers’ problems was the ick factor affair between Betty’s mother and Rodney’s father.)
I could write about Peyton Place for days, and at some point I will probably return to it. Since I’m still strapped for time tonight, though I’m posing this clip from the TV show.
I love Betty’s talk with Allison at the pillory on the town square; her knowledge that they stand as a silent mediator of female transgression, especially for those who know and then reject its meaning. For the virtuous bookish Allison, the pillory is only an historic curiosity and artifact. For the sexually active Betty, the pillory is the material manifestation of her secret (at least for now) sin and the humiliation that awaits her at the hands of small town hypocrites when it’s revealed. In a larger sense, the pillory is Peyton Place. 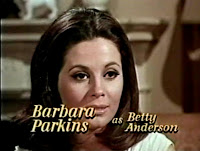 A: You’re looking at that as though it’s the first time you’ve ever seen it.
B: Was I?
A: Yes, you were.
B: Maybe I was
B: Why do they keep it here?
A: Umm, visitors…summer tourists, I guess
B: Not for us?
A: What do you mean?
B: Well we see it too . We see it every day. We never think about it. Do you Allison?
A: Well, not exactly. I mean I know it’s here.
B: So did I.
Betty’s appointment with new doctor in town Mike Rossi (Ed Nelson) and her response to Rossi while she waits to know what she already knows, got audiences gaspy. Betty didn’t regret throwing away her virtue, only the consequences.
B: Welcome to our Puritan village
M: Well I’m no Puritan.
B: Did you happen to notice that thing in the square down there? That wooden thing with the holes for the arms and head.
M: You mean the pillory?
B: That’s how they used to to punish people.
M: That’s 200 yeas ago.
Time change
B: That’s what you think now, Dr. Rossi. You’ll change you mind if you stay here in Peyton Place.
Watching this scene, I get kind of queasy. Watching Betty I can’t help but think of The Girls Who Went Away. Betty’s defiance wouldn’t have lasted long in Peyton Place. She’d not have had her hair cut off She’d have gone away, but for the traffic accident that renders her sexual transgressions moot. Sort of. At this point, Betty got soapy, pretended she was still pregnant, nailed Rodney who was trying to trade up with Allison, and…to be continued.

4 Replies to “Betty Anderson: A Little Clip from Peyton Place”