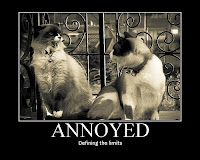 Gee, I go away for a day and find adoption annoyances multiplying like bunnies.

I’d originality planned to write a little analysis about each post, but at the rate it’s going, if I do that I won’t have time to write my own annoyances.  So, instead Ill just put down links with a brief quote from each.
Trace DeMeyer has issued a second annoyance with some excerpts from Katheryn Joyce’s “Shotgun Adoption,” which appeared in the September 4, 2009 issue ofThe Nation.
QUOTE: CPCs (Crisis Pregnancy Centers) might persuade reluctant women by casting adoption as redemption for unwed mothers’ “past failures” and a triumph over “selfishness, an ‘evil’ within themselves.
Barbara McArtney  guesting on  Reformtalk writes about the corruption of international adoption.

QUOTE:  Every country the Industry enters has been dirtied and only created problems and anger in its wake. If this is such wonderful, helpful work, where’s the accolades from countries, HR groups and ANYONE outside the industry? It faces nothing but criticism from all but its insiders. There has been a lack of any meaningful enforcement or improvement. Just the same rush to country to make as much money as possible before it closes due to their own illegal actions. There is no preservation of identity or family relationships. The closed model of adoption is the norm and has been proven by research to be bad for children yet it continues

Margie Perschied, adoptive Third Mom blogger is annoyed (as are we all) about the organizational  silence and  footsie played by professional organizations and their friends while corruption and bad practice continues to go unchecked.
QUOTE:  There is, in my opinion, absolutely no excuse for organizational or individual silence within the established adoption community on issues like for-profit adoption agencies, abusive surrender tactics, denial of original birth certificate access to adoptees, denial of citizenship to intercountry adoptees, or adoptee deportation.  There is simply no excuse.

Reformatina at Reformtalk takes to task the reform community for i’s lack of cohesion and compassion for other members and groups.

QUOTE:  It occurred to me that very few people try to do this. Instead, they jump to preconceived judgments about others when coming into an effort to reform something. They marginalize. I have watched the reform movement discard or push out some genuinely good and thoughtful people over the years due to its own biases and sometimes downright meanness.

There’s plenty to think about and more to come.


Annoyance, thy name is adoption.