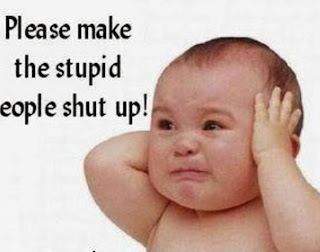 I spent a good part of yesterday trying to repopulate my Twitter account that’s been fried for probably a year. In the process Twitter gave me a continual feed of “Similar to Daily Bastardette” accounts which I dutifully checked out.  I found  new people I’d never heard of and old one’s I’d forgotten. Amongst the forgotten was Reunited Cricket  known for her infamous yet deserving Hall of Shame Blog Awards highlighting the blogs of truly stupid paps and adoptive parents. The irony, of course is that the awardees have no idea why they’ve been inducted into the Hall of Shame. I mean, these are the type of folks who upon the arrival of Baybee Bumble would hang a Kinko’s-generated GOT’CHA banner across their porch, with balloons and rainbow unicorns floating over it.

I thought I’d seen it all through the years, but Cricket this week has uncovered a blog so inane, so stupid that its author makes Melanie Capabianco look like Saint Clare of Assisi.

The award-winning entry is entitled Azer-by–wha?  It recounts the blogger’s attempt to adopt from Azerbaijan though she’s not sure if it’s in Asia or Europe. In the process, this rube manages to insult the entire country, its culture, and its stigmatized unwed mothers who apparently God finds so pleasing that he created them to produce swag for adoption “professionals” and product for US christian paps.

Unlike the blogger. I’ve actually been to Azerbaijan, mostly Baku.   It is one of my favorite places in the world  I  once spent an evening there at a hotel disco (soviet style) where for $20 hard currency we got a bottle of champagne and a tray of fancy French chocolates. (So much for Red Oktober). Another night, sitting on my balcony, I witnessed a near rock n roll riot when a big stadium concert nearby by some Euro metalheads  was cancelled at the last minute due to “wind.” (Baku is known as the Windy City.) Refunds over this Act of God  were not-so politely declined despite the promoters strong held belief that ticket holders were expected to take  the ripoff without  sigh or murmur. They didn’t. Baku is also the place I learned that drinking hot tea cools you off, a trick I still use in the summer.Our paps, of course, will forgo discos, but maybe not champagne,  in their obsessional pursuit of a Baybee Bumble of their very own..

Cricket states the case so well, that that there is really nothing I can add to her commentary. I don’t want to take anything away from her, so I’m not posting a direct link to the latest Hall of Shamer. Read Cricket’s takedown and then click her link to the blog and read the original. I’m s tempted to post a comment on Azer-by Wwa?,  but  don’t want to open a floodgate  that would take down the blog.  It’s well worth the forbearance keep the train wreck on the tracks.

I can’t leave, though, without giving you taste of the brazen stupidity of this blogger. .I assure you is not made up:

We have not been married long (in another place she says they’e been married a year), we would like a child as young as possible (we have everything to learn about being parents  and think it would be easiest for everyone if the child were very young) and are able to travel.

The Hall of Shame Awards has been on hiatus.   I hope Cricket picks it up again on a regular basis..

I planned to post a couple pictures of myself in Baku but the albums aren’t where I thought they were. If I find them tomorrow I’ll stick a couple in. I’ve instead included a pic of me in St. Petersburg waiting for the trainwreck.

*****
TWITTER:   Twitter fried my account and I was forced to start a new one.  Besides tweeting The Daily Bastardette I tweet  (and retweeet) about adoption issues, civil rights, freedom of the press,  the corporate state, plus some local stuff. Join me there! Daily Bastardette @DBastardette.

One Reply to “Truly Stupid PAPs: I’m adopting from where?”