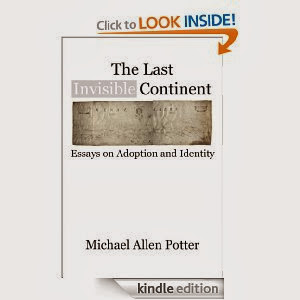 Although I am an adoptee rights activist I seldom read adoption books outside of history or other topics I have a specific interest in. I almost always avoid memoirs. To be honest most are awful. It may be good therapy to write your adoption story, but please leave it in your desk drawer!

Michael Allen Potter’s The Last Invisible Continent: Essays on Adoption and Identity is quite a different story. I’ve been familiar with Mike’s work for several years. I knew part of his story. I knew this book would be important. I was thrilled when he emailed me a few days ago and told me the book was finished and on Kindle. I downloaded it immediately.

And holy moley! What a book it is! Unlike the typical weepy adoption memoir this one is hard and gritty. It’s of the street, but also of the heart. Mike doesn’t pull any punches about his mother’s mental illness, his battle with alcohol, or his rotten adoption, which he discusses almost in passing, though it it obviously the core of the essays.

My personal favorites are the essays “The Re-education of Michael Allen Potter” and “Checking the Bastard Box.”

In “Re-education”, Mike recounts how is mentally ill mother ends up living in a crack house–evicted from her own modest government-subsidized apartment by some rockhounds down the street who then extort her to live in the dump. Mike leaves San Francisco for a quick trip to Schenectady to return her to her rightful home. She’s ambivalent about leaving, but happy to see him. His run-in with her “landlord” (not to mention his mother’s reaction to his arrival) is both scary and funny. What strikes me most, though, is Mike’s respect for her illness. He doesn’t treat her like she’s crazy. Ever. He watches out for her in person and from afar, yet respects her independence and choices, even while he worries. Much to Mike’s surprise and relief he manages to scare the shit out of her crack dealer tormentors who end up towing his line.

“Checking the Bastard Box” examines the “fake Mike” the adoptee without his records or roots. The essay opens thus:

When I arrived in San Francisco, late in the summer of 1996, I had someone else’s name. In my bags were packed photographs of someone else’s family and every form of ID that I brought with me was fake; my driver’s licence, all of the credit cards that helped to propel me across the continent, my birth certificate, my Social Security and ATM cards. All fraudulent. My medical records contain no information. My blood type has never been recorded. The person whose name appeared in thick block lettering on my English degree was just as fictitious as the Pucks and Oberons of my undergraduate studies.

Those few sentences describe the identity conundrum that many adoptees live. In existential terms we have no authentic identity. Our identities are state constructed, a Potemkin village of fictitious documents, family lies, and the unwanted paternalism of the American a culture of American adoption secrets and lies.

Mike like any thinking bastard knows that bastards are erased from their history. Nothing, apparently happened to us until we were adopted. Saved from one oblivion and dumped into another. Our existence is determined solely by our relationship to the state and the person or persons to whom the state transfers our bodies. 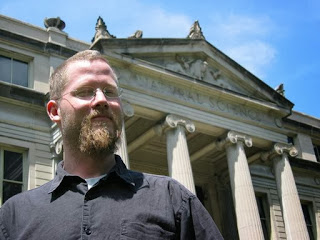 In “Check the Bastard Box,” Mike descries this erasure:

I do not have legal access to my own immediate or extended family members, medical records or heritage. My name was changed three times before my tenth birthday, and these name changes were (allegedly) meant to convey a sense of inclusion into those new facsimiles of family units. In reality, however, what adoption did in both cases was to simply transfer ownership of a human being from the state to unrelated private citizens upon completion of sizable financial transactions.

I can’t end this review without sharing what happens when Mike attempts to obtain non-ID information from the State of New York.It is very similar to my own experience in Ohio.

From “In Propria Persona:”

In February 2000 I received the results from the New York State Department of Health’s Adoption and Medical Information Registry. Almost 30 years after the fact, Peter M Carucci, Director of Vital Records wrote to inform me that my parents were white, Americans and that my father was male and that my mother was female. Later in the essay he notes that he was also informed “that my brother was (astonishingly) male.” In 1981 I had a similar experience.

Unlike Mike, I had already received my OBC from the State of Ohio and I was looking for information on my unnamed father. I was informed by a social worker from Toledo Crittenteon Services that my father was white, a high school drop, blue-eyed and a man.

In the end, Mike jettisons’ the Fake Mike and claims his original self:

I  took back my own name for myself, but I also did it for my sister and my brother and for the thousands of adoptees whose lives, identities, and families are still being held hostage by the State of New York.

The Last Invisible Continent is an important book, a superb and elegantly written mixing of the personal and the political. I don’t know how anyone living outside of the adoptee rights movement (which already knows the truth about adoption) could read this and not realize by the end that adoption secrecy and sealed records, maintained by the corrupt and corroded adoption industry and it’s church and political cronies, must be eradicated. Mike, as those ubiquitous theys say, “knocks it out of the ballpark.

Michael Allen Potter is right up there with memoirists (and memoiresque) Craig Hickman, Emily Hipchen, and Dan Chaon. Read this book! You can download it on Kindle.

One Reply to “Book Review: The Last Invisible Continent: Essays on Adoption and Identity by Michael Allen Potter. A superb and elegantly written mixing of the personal and the political.”