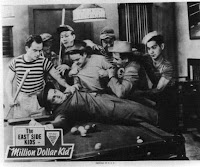 Have you recovered from the National Council for Adoption’s big Stay-at-Home Gala last night?

I just pulled myself out of bed after a night of amended birth certificate burning, heavy boozing, and indiscriminate sex with my local street gang celebrating how adoption has improved my life. (left) As I stumbled into the kitchen to mix myself some hair of the dog and feed the angry kitties, I decided to check my email. And am I ever glad I did! Right there between Facebook messages and a credit card bill I found a note from NCFA and “children everywhere waiting to be adopted,” thanking me for my generous support of adoption. With my help, NCFA was able to raise $14,000 “to benefit vital NCFA programs that help find families for children who are waiting to be adopted.” Or is that programs that help adoption agencies harvest pregos who are waiting to give birth? Or is that programs that help find other people’s children for waiting middle-aged couples who feel entitled to them? I’m so confused

Sadly, it seems that the mailman failed to deliver those 6,000,000 cards bastards sent thanking NCFA for protecting us from ourselves and our deviant histories. Thanks. NCFA, for making us legal pariahs. If it saves just one from the truth, then it’s worth it.

If you’d like to see NCFA’s own personal gala, go here for some rousing pictures at the NCFA mill. I know they make me hungry for a Domino’s Pizza.

One Reply to “THANKS FOR THE GALA, NCFA!”