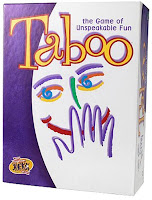 Joan Wheeler has an excellent blog today on the NCFA Stay-at-Home Gala. The eagle-eyed Joan caught something I missed yesterday with the on-site NCFA pictures. A minor point, I suppose–but is anything really minor in adoption?

Those little gixmos are what exactly? Is someone typing into a plastic cel phone to “get” a pregnant girl? Is someone holding a calendar? Countdown to adoption day? One box says “Taboo” on it. Yeah, sure, lots of issues in adoption are taboo. Taboo Toys?! Sex toys from “Talk Sex With Sue”?! (That’s a sex-ed television show out of Canada, folks! Hey, I’m a Social Worker, I’m supposed to know about these things!)

As for “taboo” that should be Taboo: the Game of Unspeakable Fun. For those not familiar with Taboo, the object of the game is to get the other players to say a word without saying any of the obvious words connected to it. Here’s an example played between NCFA and its cronies and gullible leggies: ax murderer, porch pisser, ungrateful, homewrecker, sweating sheets, back seats, danger to society, klepto, serial killer. Answer: uppity adoptees. (Bastards is just too crude for the NCFA crowd).

I collect adoption gixmos myself and I want to know how I can get the Official NCFA Stay-at-Home Gala Collection, including its exclusive Taboo game.

BONUS! NCFA didn’t videotape its Taboo game )that we know of), but you can see a Monica Lewinsky Taboo game here to get the feel for it:

One Reply to “TABOO: THE OFFICIAL NCFA STAY-AT-HOME GALA COLLECTION”