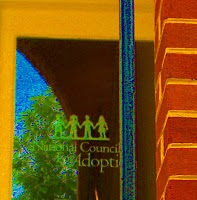 The National Council for Adoption today announced the appointment of Chuck Johnson as its permanent CEO and president. Johnson has been Acting President since April when Mary Robinson, after a few inglorious months in office, left the position unannounced and from my perspective, unmissed. Johnson also held the post of acting prez after Tom Atwood resigned in November 2008. He is the former director of NCFA’s Infant Adoption Training Initiative.

Johnson’s appointment marks the end (so-to-speak) of NCFA’s transformation into the nicer kinder NuNCFA, bereft of Piercian existentialism, angst and cranksterism. NuNCFA, for better or worse (it’s easier to kick them around for worse) is more concerned with international and foster adoption and Beltway politics than calling Bastard Nation anarchists and terrorists and “birthdads” drive-by sperm donors, and locking pregnant unmarrieds in closets. We seriously doubt that Johnson has been booted out of Congressional offices or in times of high snit, has orchestrated a dirty tricks campaign against John McCain or other blowhard politicians. As Johnson said to me at one point ,”Folks want to work with us again.”

Well, not everyone, Chuck! But enough to take NCFA off the endangered species list.

In other words, NuNCFA has corporatized and now swims in the mainstream with the Evan B Donaldson Adoption Institute,which it ideologically resembles, though both may deny it. Both are rooted in liberal do-goodism. Both love adoption as if it were sliced white bread, and make it just as boring. Both use worn-out triad and politically correct adoption language and project reunion and therapy and self-esteem issues on to us, dismissing our rights while pretending to address them in their self-projections. Neither represents bastard interests as political beings. The only real difference between them is that NCFA does what it says it will do, and the Donaldson doesn’t.

If Bill Pierce could spin, he would.
Last month I attended the annual NCFA conference at National Harbor, which I still need to write about it. At no point– just as at no point in my previous four NCFA conferences- was obc access even mentioned. I swear!

I have argued for years that adoptee rights activists need to revise their paradigm. The National Council for Adoption is not the only bad guy in town. Often, it’s not the biggest one either. If NCFA were to go away tomorrow, our records and rights would still be difficult to get back. To be sure, NCFA founding president Bill Pierce invented the language and the framework of the anti-bastard political culture that now runs amok amongst the ACLU, anti-aborts, churchies, fake corporate feminists, newspaper commenters, and extends into the blue horizon of urban myth. Scratch a deformer and you’ll find an individual or a group that has internalized Piercian ideology and language up-ending our bastardy into privilege for some, rights for none. Here is the Massachusetts example, where deformers there actually validated, for low political purpose, the very NCFA arguments they claimed to reject.

Dr. Pierce left NCFA 10 years ago and he’s been dead for over six years. NuNCFA is not Bill Pierce’s NCFA, and anyone that treats it as if it is, is a political naif. No serious rights advocate can live in the past. Sure, use the history (you’d be surprised at how many NCFA staffers I’ve met over the years have no idea why their corporation is loathed by the people they think they speak for) but work in the present. Know your enemy now. All of them. 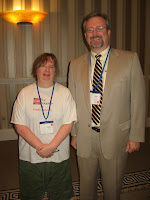 No one is more responsible for pulling the NCFA dino kicking and screaming into the mainstream than Chuck Johnson. I talked to him several times during the NCFA conference. He made it clear that NuNCFA is willing to work with anyone where there is an area of agreement. Johnson is particularly interested in “ethics and responsibility” in adoption So far, of course, those ethics and responsibilities don’t include obcs on request and unrestricted, but I’m not about to give up. NCFA has already raised the white flag on open, single parent and gay and lesbian adoption. Bastards are their last frontier. And we have have no white flag.

NOTE: that’s a bad picture me in my Stop the Adoption of Evelyn Bennett t-shirt and Chuck Johnson at the conference. Photo by Gladney’s Heidi Cox, believe it or not)