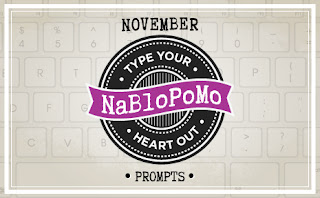 Against my better judgement, I’ve signed on for November 2012 open topic NaBloPoMo .   That is I’ll post a blog every day–in this case for National Adoption Awareness Month–for the month of November.

I say better judgement, because since I’ve been forced back into the workforce, I have limited time to do much of anything but work and sleep.  My work schedule is not normal. One day I start at 3 AM and work until whenever the job is done; the next day I start at 9 PM and work until 2  AM.  It’s reaked havoc on sleep, eating, and anything normal people do. All for half of  the hourly rate I made when I left the Ohio State Univeresity 14 years ago–and working half the hours. I’m not going to write about the job other than to say that as a “professional” inventory counter, I’ve got a great view of the decline of America via consumer culture and goods. Did you know that Hanes now makes underwear in Haiti? And don’t get me started on party stores, Ollie’s, and worst of all–Victoria’s Secret panty tables.  .

National Adoption Awareness Month is the creature of the adoption industry, established to let the demons of adoption (this year’s winner should be announced shortly) cotton candy over the rest of the year’s stories of adoption crime, corruption and greed.  For an incurious MSM it makes good mindless copy for the masses.. For adoptabloggers it signifies a month of rage, reflection, and reminders of the industry’s attempt to marginalize our experience,and rights, and to silence our voices.. Unlike many who cringe at the very thought of NAAM, Bastardette,  rather revels in watching the flailing of the beast. That Russian Children’s Ombudsman Pavel Astakhov, alone, has suggested that Russia shut down adoption to the US, even as a  new intercountry agreement goes into effect should be enough to cause a run on Prilosec.  Before we go any farther, we must quote Astakhov:  “The U.S. is a lingering pain for us, as literally every day we receive more and more news about violations of the rights of adopted Russian children.” We know the feeling, Pasha!

Just about here disaster struck.  The last 2/3 of this blog entry disappeared as I was proofing..  My computer screen sort of flipped and–voila–no copy!  The lost blog was all quite brilliant, I assure you.  Rather than reconstruct at this late hour, I’m will  let it go for now, and just conclude that the Daily Bastardette is indeed back daily. I’ll be writing about all sorts of adoptastuff this month:  conference hopping, NCFA, deformers, news stories, a book review or two, and of course, film.  Does anyone have any thoughts on the upcoming adoption storyline on General Hospital?  Bite my tongue, but I’m hoping Lulu and Dante decide to “investigate alternatives to adoption.”  It will be yukky, of course, with some deranged surrogate, but we just got Baby Daniel out of the clutches of Heather Webber. and it’s too soon to start a new round of switched DNA tests and baby thefts.

Addenda, November 2, 2012.  Lately I’ve been reverting and dating all sorts of papers 1912 instead of 2012–including the title of this entry.  Though that indicates my state of mind at the moment, I do not intend to write 30 blogs this month on the way adoption was 100 years ago.  Thus, I’ve corrected my title.

One Reply to “NaBloPoMoing Through Adoption 2012”