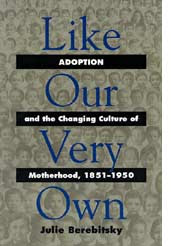 I tend to avoid  reviewing  books about adoption.  In fact, I avoid books about adoption in general,   I’m not sure why. Maybe for the same reason that when I worked in theatre I avoided plays.  Too much like work. Besides, having. come of  age reading 19th century literary essays, the New York Review of Books, and the Evergreen Review, anything less than a 6,000 word essay referencing the obscure is beyond my patience. A “formal “book review is a mission impossible.What goes through the head fails to make it down the fingers and on to the keyboard.

Still, occasionally I find a book about adoption that speaks to me; that. I want to share. As an  historian, by training, this usually means books on the history of adoption.. And, as a specialist in the Progressive Era (which I blame most for of our current  economic and social messes) , I especially look for adoption books that cover late 19th-early 20th century. Like One of Our Very Own: Adoption and the Changing Culture of Motherhood, 1851-1950.by Julie Berebitsky is one of them.

I first read Like Our Very Own in 2009. A few years earlier I’d read a conference paper by Berebitsky on the topic of Republican Motherhood.  As I worked out my own philosophy of adoption (which is still working out.) I revisited her paper repeatedly. Somehow I missed that her full-blown work had been published not much after I first read her paper until I ran across it one day while net surfing. , 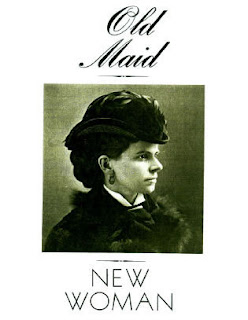 While the entire book is an eye-opener (I thought I knew a lot about  adoption, but I didn’t)  the last two chapters were of particular interest::  the rise and fall of single woman adoption.and how Progressive  adoption policy  challenged the hetero-normative model of family and redefined gender roles and the traditional family.  To hear our current adoption industry promoters talk, single parent placement  is a  new phenomenon. created by their benevolent liberal inclusiveness.  It’s not.

Another surprise is the  he early  pathologization of adopters by the social workers, something I had previously thought had not been popularized until late in the 1950s.  In the 1990s, NCFA founding president Bill Pierce opined to legislators,  policy wonks, and social workers  that adoptive parents  who supported OBC access should be ignored since they had simply been guilted in to the movement by their ungrateful  indulged bastards.

Berebitsky and  Regina Kunzel (Fallen Women, Problem Girls: Married Mothers and the Professionalazation of Social Work, 1890-1945  overlap, covering the same historical period and the growth and professionalization of of the social work industry. But  while Kunzel focuses on the the effect  professionalization had on treatment of  first mothers, Berebitsky focuses on its  effect on adopters. Both  groups were medicalized,  psychoanalyzed, and manipulated by social workers to serve their own “scientific” and   professional  interests. . It’s amusing in that sick, sort of adoption way, to see how professional adoption went from overly-protectionist scientific child placement to a don’t- give- a- damn, giimme-your-money  commercial operation that exploits adoptees and first and adoptive parents with equal disregard…

Like Our Very Own also discusses the de-privatization of the family by forced state mediation..
.

Like Our Very Own own belongs along side Kunzel’s Fallen  Women, Problem Girls; Delinquent Daughters: Protecting and Policing Adolescent Female Sexuality, 1885-1920  (Mary E Odem) Wake Up Little Susie and Beggars and Choosers  (both by Rickie Solinger), and The Girls Who Went Away  (Ann Fessler) as adoption essentials. Adoption as we know it now, can’t be explained without these books.

Like Our Very Own is solid piece of feminist scholarship in a field that screams for more.  It’s controversies are still relevant today.

One Reply to “Book Review: Like One of Our Very Own”