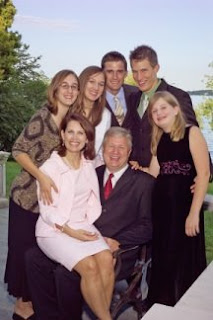 Michelle Bachmann is back!

Recently, The Beast named its annual 50 Most Loathsome People in America. Ma Belle Michelle clocked in at #47 below Barack Obama and M. Night Shymalon but higher (that is, less loathsome than) OJ Simpson, John Updike, Ben Stein, Tila Tequila, John Fund, Blago, Bernie Madoff, Sean Hannity, Sarah Palin (#1), and a host of other finger wagging political, sports and media whores, parasites, and hangers-on who preach, pick our pockets, and insult our intelligence daily for our own good.

Regular readers may remember that Minnesota Congresswoman Bachmann was a featured speaker at the 2008 National Council for Adoption conference in Washington where she gave us memorable accounts of “launching her biologicals” and fostering 23 kids, mostly girls, including one who ran away from her. (left: launchables and hubby.) You may want to go back there and refresh your memory before continuing.

While I was looking for links to place here, I ran across this little nugget from a Dump Bachmann blog dated September 3, 2006: Fight Pork which leads us to Bachmann and Associates, a full service “Christian counseling” business operated by Bachmann’s therapist husband Marcus. Therapist Bachmann took his MA from Pat Robertson’s Regent University and his Ph.D in Clinical Psychology from Union Graduate School. According to his bio, he specializes in (my emphasis) Marriage and Family, Depression/Anxiety, Anger Management, Family of Origin Issues and Conference/Seminar Speaking.

I believe my call is to minister to the needs of people in a practical effective, and sensitive way. Christ is the Almighty Counselor. My wife and I are the parents of 5

Would you go to these people with YOUR adoption issues?

All of this information, including personal information on Therapist Bachmann is here.

Here is the complete charge against Rep. Bachmann as published in The Beast:

Charges: Exemplifies the simmering, all-American fascism lurking behind the forced smiles of uptight church ladies throughout “real America.” Echoing Sarah Palin’s alarming hints about “helping” the media do its job, Bachmann’s casual call for a “penetrating” press investigation into “anti-Americanism” in congress was so fucking dumb it made Chris Matthews seem smart. Once it occurred to the Oral Roberts University graduate that calling for witchhunts against Democrats might be a tad extreme for election season, she decided to just pretend she didn’t say it, and then she blamed Chris Matthews. Then she just blamed words. Then she denied it again. Then she won. Way to go, Minnesota’s 6th.

Sentence: Assigned to conduct her own “expose” on anti-American views, in Taliban-controlled Afghanistan.

2004: Tony Blankley (#43), former child actor, Heritage Foundation shill, and at the time, editorial director of the Moonie Times…oops, I mean Washington Times. Blankley has MC’d several NCFA ceremonies and fundraisers including this.

2005: Bruce Chapman (#46), founder of the wacky Discovery Institute, known mainly for its promotion of Intelligent Design in the curriculum but purveyors of lots of other nonsense. After retiring from the National Council for Adoption, Bill Pierce served as Senior Fellow at DI and ran its Washington office.

2007 : Minnesota Senator (what is it about Minnesota?) and NCFA Hall of Famer Larry Craig (#20) (for NCFAnoid picture, scroll down)

4 Replies to “MICHELLE BACHMANN NAMED TO MOST LOATHSOME LIST; CARRIES ON NATIONAL COUNCIL FOR ADOPTION TRADITION”