Earlier today it was my great pleasure to attend the first anniversary meeting of the Ohio Birth Parent Group (and Facebook). . The event. Living Adoption: Life-long issues in the Birth Parent Experience,  was held at Camp Mary Orton just north of Columbus and Worthington and featured Brenda Romanchik as facilitator and guest speaker. The first session was open only to “birthparents”, so I can’t report on that. The second session was a two-hour talk.open to the public including social workers who got CIUs,  and Q& A led by Romanchik.   About 19 attended the fist session (including one woman all the way from New York City!), about 60 the second. The group was mufti-generatinal and included parents in closed an open adoptions. Unfortunately I am sick with some kind of stomach bug (worse as the day goes on, and I’m going to bed in a few minutes) so and didn’t take notes. To make it worse, the shutter on my camera stopped shuttering, and I only got one picture.So here is a general review and some thoughts. 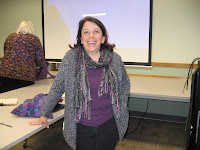 I met Brenda online about 18 yeas ago on the original alt.adoption. Her son, Matt,  was a relatively little guy back then, and I was shocked to learn that he’s now 27. Yikes! Outside of sealed records, I was new to other aspects of adoption. I’d heard of open adoption, but didn’t know  much about it. Apparently a lot of people don’t know anything about it today either, judging from the way some circles remain horrified at the thought, and others think its a panacea for adoption loss, and others conflate it with records access. In a way Brenda is a marker of how times have changed. She and an adoptive mother I met on an old forum that barely exists anymore, were experimenters up-ending traditional agency secrecy in the face of industry opposition. Back then, only 20-30% of adoptions were open, and most of them only to some degree and Brenda’s name was a dirty word.. Smithlawn, a NCFA founding member, still does only closed adoptions.

I hadn’t checked out Smithlawn’s webpage for years, and as I wrote the above, decided take a look to see if they’d changed. ha!

Here’s the latest “confidentiality” statement, telling us all we need to know about the agency’s low regard for its producers and product, and its high regard for its consumers of secrecy.  And no mention that  Smithlawn has the distinction of being the first adoption agency in the country charged under civil RICO  (Racketeering and Corrupt Organizations Act) given a hefty fine, shut down for over a year.

…Smithlawn realizes that the adoption process can be extremely stressful for potential adoptive couples. It is a complex maze of regulations, forms, and legal requirements. Our staff walks you through each step…


No, the logo really says that.  Smithlawn forgot to add:  from each other.

Sorry to digress  I couldn’t help myself.  I want to make clear that Brenda was not selling open adoption or any other kind of adoption,.but instead  discussed  navigating around adoptasharks and cleaning up after the mess they’ve made both ethically and legally..

Not being a birth, first, bio, original, natural mother of any kind, I’m not  the best commenter on the meeting and feel a bit out of my league..What I did see is the concept of  “birthparent” centered and controlled, empowerment. As with bastards, “birthparents” should be (in the words of OBG) “the central agenda-setters of their own post-adoption support.and activities.” “Birthparents” should not be “facilitated” by agency support set-ups, but by themselves and their own experiences.

Central Ohio  has not had a “birthparent” support group for about 15 years that meets regularly. (or an adoptee support group, either, as far as I know). The last support group I attended locally  was small  “triad group” (sorry, but I’ll use that onerous term in this case) and very boo-hoo-hooey.  I attended to discuss sealed records, but that obviously wasn’t on the agenda. .I  wanted to shake people.

No shaking fantasies today! Brenda discussed grief, loss, trauma, b- and aparent relationship-building,  (language especially PAL–no fan), differences between “pregnancy counseling” which channels parents  into the adoption mill and “options counseling” which– well–presents options to adoption,  juxtoposed with her own experience.Whew!  Doing an open adoption right is hard work. I was especially happy that Brenda included fathers, usually portrayed by adoptacrats and media as pests screwing up the best laid plans of the adoption industry.  The politics of adoption was an underlying theme while not for one minute disregarding the personal.crap of adoption.

Kate Livingston and the folks at Ohio Parenthood Group are to be congratulatead for this one-year anniversary event, and for bringing Brenda to town. It was good to see my old buddy Dawn Friedman and meet some new people–Kathy and Rose. And thanks to Brenda for the Bastard Nation high five!

I apologize for not making this a better review, but I really need to take some more stuff for my stomach and go to bed.

One Reply to “Living Adoption: Life -long issues in the Birth Parent Experience: A Short Review”