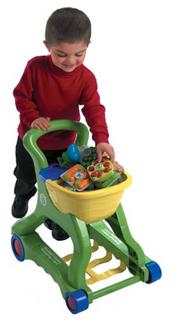 I received several private emails from fans encouraging me to continue my eBay window-shopping spree. Though much of the current Ebay beg-a-thon is for financing adoptions from foreign lands, there is still some good adoption kitsch out there just waiting to be snapped up by sentimental adoptashoppers. Amongst the day-glo bracelets, Italian Choose Adoption charms, and adoptable Teddies, a few true pieces of work have appeared. Unfortunately, some of them have already been sold, but I think it’s worthwhile to see just how deep AdoptionLander taste has sunk in the last couple of years as the HWI supply continues to dry up.

Here for instance is the Angel Dollar For Adoption offered by Brad and Camille to help them bring “our daughter home from China.” Excuse me Brad! Just how did YOUR daughter get to China and why was she left there? But why quibble! 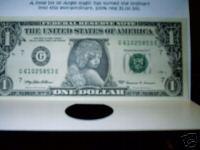 As you see, this is a real genuine US George Washington dollar bill, only an angel’s head is superimposed over George’s. Isn’t there a law against defacing US currency? Actually, yes. Title 18, Section 33 of the US Code specifically says:

Defacement of currency is a violation of Title 18, Section 333 of the United States Code. Under this provision, currency defacement is generally defined as follows: Whoever mutilates, cuts, disfigures, perforates, unites or cements together, or does any other thing to any bank bill, draft, note, or other evidence of debt issued by any national banking association, Federal Reserve Bank, or Federal Reserve System, with intent to render such item(s) unfit to be reissued, shall be fined not more than $100 or imprisoned not more than six months, or both.

Brad tells us that we can spiff our the dollar to fit our own personal aesthetics. With feathers and “scrapbooking paper,” for instance. Anne Geddes he’s not. And, by the way, you’re actually not purchasing the Angel Dollar. You’re sending a donation. Brad should consider holding on to his $1.00 bills since he may soon have to pay his lawyer and the government–hopefully not in Angel Dollars.

Books. There’s a copy of The Chosen Baby (1950 ed.) yea! Glad to see its return. And a curiously titled volume: Raising an Adopted Child. “Somebody” wasn’t paying attention in English class. You raise cattle; you rear children. Oh, that’s right! We’re talking about adoptees. My bad!

For totally creepy there’s “Reborn Preemie–Keelie” a foundling. Here is Baby Keelie’s story as told by seller “Mother Jean.” Oh no! It couldn’t be THAT Jean from Safe Haven Yes, could it? I doubt it. Our Jean is way too busy with live babies.

Keelie’s story is an all too common one, I’m afraid. Another case of a mother far too young to properly care for her infant, particularly one so small & sickly. When Keelie first came to the “Foundlings” home, she weighed little more than a pound & a half & was a mere 16″ long. Wearing only a dismal little sundress & dirty diaper, Mother Jean took her in & gave her the expert care she so desperately needed. There was not an ounce of fat on her anywhere. Holding her felt like holding a board! Today, Keelie is a plump & cuddly baby who snuggles right into your arms when you pick her up. Bald as bald could be, she now has a lovely shade of medium brown hair that frames her face & is as soft as Angora mohair. Mother Jean suggests you dampen Keelie’s hair & scrunch it into pretty curls for special days. She has newborn blue/gray eyes (all newborns do, of course), but they sparkle with life now, as they never did before. From the top of her head to the tips of her toes, Keelie has been bathed & scented, primped & pampered as only Mother Jean can do.

By the way, Keelie comes from an old & respected family. “Berjusa” is the name. [whisper] They were once very big in the toy business, you know…

Nobody will ever have to know you had this baby….

If you ask me Baby Keelie looks dead.

Keelie ought to go over big, though, with the Baskets for Babies folks in Pittsburgh. They must be getting pretty frustrated waking up every morning and finding dog-doo, newspapers, and cigarette butts in their baby baskets, instead of a foundling. Since they’re always complaining about money, Baby Kellie would be a great fundraiser for the Illinois, Save Abandoned Babies Foundation, though she might not bring in as much as a real live foundling. But you never know! 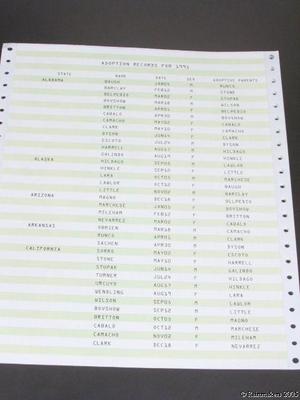 My personal favorite is the Joan of Arcadia prop 1991 Adoption Records with a certificate of authenticity from Columbia Pictures. I’m torn. Should I bid on this myself or let CaliforniaOpen grab up this treasure? Oh, that’s right! It’s a prop! But if Columbia says it’s authentic, then it must be. I’m so confused!

I can’t close without The Entitleds. Meet “stuffromtexas.” Mr. And Mrs. Stuff are selling 25 baby shirts imprinted with “From Guatemala with Love” to help finance the adoption of “our baby” in Guatemala. Mrs. Stuff tells us they’ve been reduced to selling their household goods on eBay (at least there’s no Night Ranger LPs!) because they have gone stone broke on IVF– $30,000 stone broke. They’ve maxed out their credit cards, spent their savings and oh, horrors! Their state won’t mandate insurance coverage for infertility treatments. Time for Plan B! Clean out the closets! In a revealing section of her sales spiel, Ms. Stuff complains meanly about the pitfalls of domestic adoption: nobody wants to cooperate. Birthparents, adoptive parents, adoption agencies, governments. What’s an Entitled to do? Why go to Guatemala, of course!

Why International adoption: We had to decide if we wanted to pursue domestic adoption or International adoption. After carefully weighing all aspects we chose not to do domestic adoption. With domestic adoption once you have the child in your home the birth mother has a certain amount of time (anywhere from 48 hours to 6 months) to change her mind. It is also common for the birth father to come forward at a later date if he did not relinquish his rights, and judges have been known to turn custody over to the birth father. We could not bear to bring a child into our home, raise them as our own, only to lose them.

The last reason that domestic adoption was not our choice is that you submit a “life book” or “scrapbook” of your life together to an agency or attorney and then wait to be chosen by a birth mother. We didn’t like the idea of having to compete with other potential adoptive parents.

And then there’s those Russians. Damn them! Apparently Russia was the Stuffs first choice (after much “review.”) But those horrible Russians not only kept first dibs on Russian kids for Russians, they expected the Stuffs to come to Russia twice–twice mind you–once to arrange the adoption and once to pick up the baby. I’m surpirsed she didn’t demand that Baby House #3 FedEx them one. D’svidanya Russia with love! Buenas Dias, Guatemala con amor!

We can only hope that Baby Stuff will be suitably grateful for all of Mrs. Stuff’s IVF pain and suffering and her tendious fundraising to pay for Baby Stuff’s acquision at any cost.

Wouldn’t it be easier to just buy Baby Keelie? She’s certainly cheaper, she’s perfect, she’ll never ask any embarrassing questions about where she came from, and she’ll be yours forever. Unlike Baby Stuff.

One Reply to “eBAYbee REDUX”