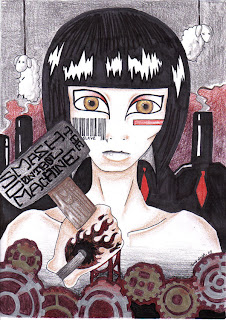 I’m frequently  asked  how I keep this up. All this adoption crap.  To be honest, I don’t know.  Some days the word :adoption” freezes down my brain. This is not what my life was supposed to be about. But…

As an historian  I find my inspiration and  endurance in history and keep on keepin’ on . My influences are many:  Emma Goldman, Voltarine de Cleyre, Gurley Flynn, SB Anthony, Lucy Stone, Big Bill Haywood, the Reuthers, Ghoulardi, early Qukuaers,  Malcolm X, Neal Cassady, Abbie Hoffman, the Yippies, the Wobblies–even Alexander the Great. And. of course,  Bastard Nationals. It’s a mixed bag that makes little sense except to me.  Among my more contemporary historical “mentors” is Mario Savio, leader of the 1964  Free Speech Movement at Berkeley.

Since I had little time to write today, I surfed YouTube and found this excerpt of Savio’s 1964 Sproul Hall “bodies against the gears” speech.  Although Savio was addressing the liberal corporate educational system -and in larger terms the American corporate state–his speech can be narrowed  to include today’s adoption machine–not only the adoption industry and its cronies in church and government, but the so-called reform movement that props up that industry through compromise and acquiescence  Can’t we all get along?

We  were told the following: If President Kerr actually tried to get something more liberal out of the regents in his telephone conversation, why didn’t he make some public statement to that effect? And the answer we received, from a well-meaning liberal, was the following: He said, ‘Would you ever imagine the manager of a firm making a statement publicly in opposition to his board of directors?’ That’s the answer!

Well, I ask you to consider: If this is a firm, and if the board of regents are the board of directors; and if President Kerr in fact is the manager; then I’ll tell you something. The faculty are a bunch of employees, and we’re the raw material! But we’re a bunch of raw materials that don’t mean to be—have any process upon us. Don’t mean to be made into any product. Don’t mean… Don’t mean to end up being bought by some clients of the University, be they the government, be they industry, be they organized labor, be they anyone! We’re human beings!