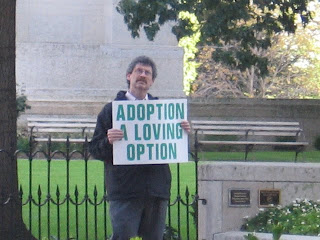 I’m cross-posting this entry from my latest Theoconia blog since the subject matter relates to adoption.

The annual Life Chain protest, aka the most boring anti-abortion protest in Columbus was held late this afternoon at the Ohio Statehouse. (October 7, 2009) The event was sponsored by Columbus Right to Life.

I’ve written about Life Chain before ( on Theoconia, go to the “Topics, People and Organizations Covered” sidebar on the right and click on “Life Chain Columbus” and “Life Chain National” for previous posts.) My October 13 2006 “Kool Aid” post details Life Chain history, and mission in relation to Columbus-based Mark Harrington-CBR Genocide Awareness ideology and actions. (For some reason my pictures for that entry have disappeared, though they are still embedded in my entry.)

This year, due to the temperate weather, rather than mingle with the crowd, I situated myself at an outside table at Pot Belly directly across from the Statehouse, where I could do a 3-fer: enjoy a late lunch, read a book, and watch LifeChain from a comfortable distance. It’s not like anything much interesting would happen.

As usual, the protest started late and no one seemed to pay the protesters much heed, even at full staff– about 50-60 soccer mom and retiree types and a few little kids–down from about twice that number three years ago. Life Chain, you see, eschews speakers, bloody blender baybee bits blow-ups, and hand-outs. 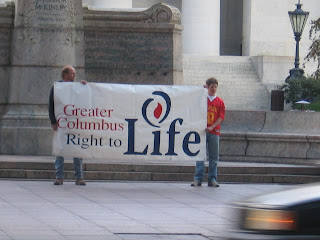 I don’t know why, but the fat priest, the angry nun, and the big whomping crucifix are no longer a Life Chain feature. The formerly ubiquitous “Adoption a Loving Option” signs were absent save one held by a man standing near the High and State Street end. Perhaps local Life Chain management understands that adoption–at least the healthy white infant type it promotes–is economically unfeasible for its constituency in a tanked economy.

Usually an all-white protest, this year’s vigil featured two black male teenage holding “Abortion Kills Children” signs on the corner of Broad and High. They stood out. Especially when they sneaked to the curb and did a little quite-unlike-Life Chain dance followed-up shortly by two shouts about 10 seconds apart: “Punk Bitch!” Now that made me shut my book momentarily. Who and where the epithet came from remains a mystery. Unfortunately, traffic got in the way and I couldn’t get any pictures. Shortly afterward the two disappeared permanently behind a string of buses that pulled up to the Statehouse to pick up rush hour passengers.

Early on, a man walking by my table looked over at me and said, “People across the street Awful.” I don’t know if I’d call them”awful” except as an adjective: ineffective, lackluster, dull, pointless, boring.

Life Chain is supposed to be a “silent witness” to raise abortion opposition awareness. Yesterday, it elicited nothing more than a big yawn. Not even CBR “truth trucks,”which in the past have glommed off Life Chain, bothered to show up. 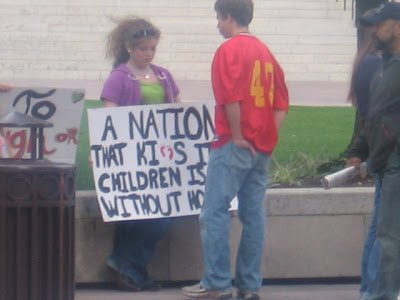 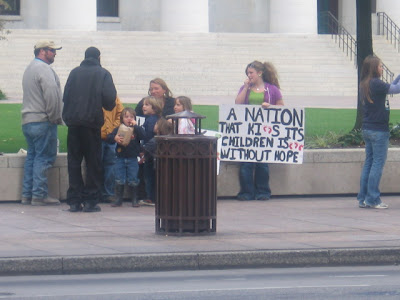 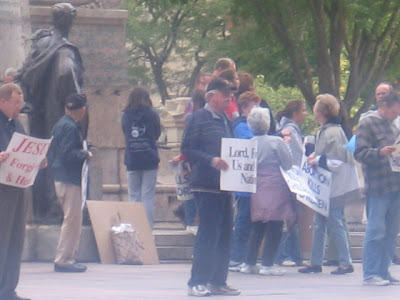 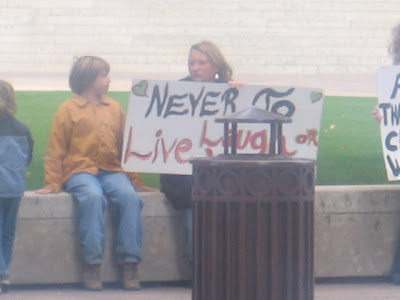 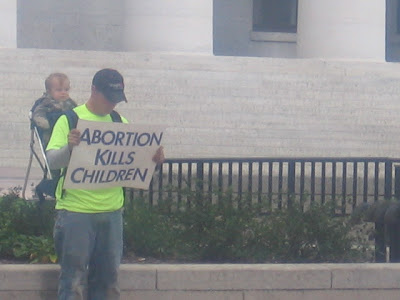 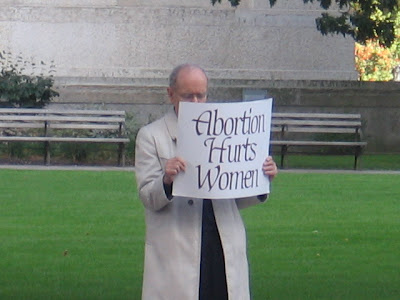 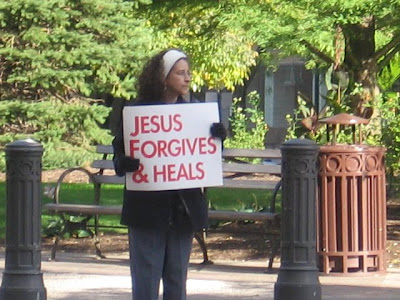 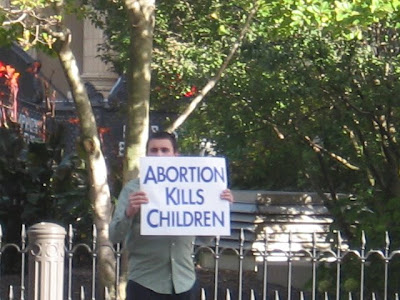 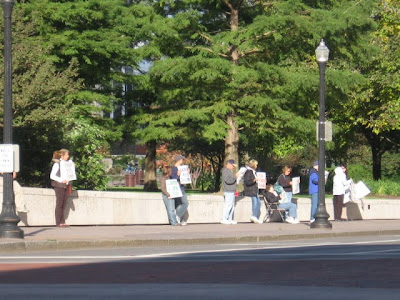 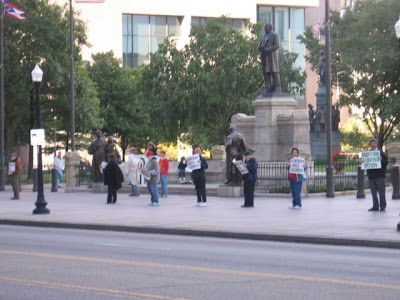 One Reply to “COLUMBUS LIFE CHAIN: ANOTHER BIG YAWN”