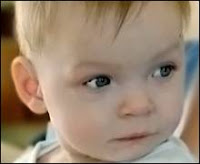 Miles Harrison remained hospitalized, but a letter from him to Chase was read at the service:

“I want you to know how much I love you and how much I will always love you,” Miles Harrison wrote, saying Chase would “always be our perfect gift.”

Chase was buried in Ebenezer Cemetery in Round Hill.

So far, so good. I really don’t have much more to say about this incredibly sad event…

Excuse me while I get sick.

There now, I’m back

Chase/Dima is the second EAC Russian child to die at the hands of Forever Families. In November 1998, Logan Higginbotham died of massive head injuries. Her adoptive mother Laura claimed the toddler accidentally hit her head on the floor of an upstairs bedroom, but three years later medical experts concluded that her head had been intentionally slammed into a wall. Laura Higginbothman spent one year (yes, one year!) in prison. I wonder if EAC made money off her her death, too.

I want to make it clear that I do not put this case in the same category of those children who have been murdered, and even tortured, by their adopters. But I simply cannot get over the the cheek, the audacity–I don’t know what to call it–of shilling on the grave of this child. Perhaps some readers can come up with better words than I can.

Obviously, the Harrisons made this decision, but who whispered in their ear?

Has EAC no shame?

ADDENDA: Baby Love Child has a terrific entry this morning: Dmitry Yakolev’s/Chase Harrison’s Death and the the Linquistic Objectification of Adoptees. Here is an excerpt:

It is not an adoptive toddler’s responsibility to “give” to those surrounding their adoption. It is the responsibility of those adopting (and the community they welcome around them) to “give” to the adoptive child. That is what they legally signed on for when they entered the process of trying to become adoptive parents, they agreed to provide for a child. Be that a home, food, relationships free from abuse, or simply attention- attention enough to not be left to bake in car for almost nine hours.

But those who view children as ‘there for the adults’ are part of the problem in all this, not a part of the solution. It is precisely these attitudes that lie at the heart of some of the adoption paradigm, that we as one time children were supposed to ‘be there for’ the adults, or that our presence was supposed to somehow ‘complete’ them, etc. This becomes adoption as something no longer focused on the needs of a child, but instead on the needs, psychological or otherwise of the adults.

And all too often, that’s the dirty little secret that hides beneath the ‘adoption as altruism’ paradigm’s skirts.