NOTE:  I was unable to finish NAM on time this year and am backtracking and backdating. Due to home repairs, I spent the last 5 days at an Airbnb. Unfortunately, the wi-fi didn’t work, so I spent my time reading books–5 to be exact–instead of writing. It was a nice vacation. I was working on this one when I had to leave.

Do adoption agencies throw Black Friday sales?  I dunno. I have a vague memory of hearing about one once, but I don’t see that I wrote about it. I’d not be surprised. Georgia Tann had big Christmas sales back in her day, but even the Margaret Cole, the now dethroned Queen of Adoption Crass didn’t want to look that crass. Maybe.

Now enter the “fertility” industry. which has no compunction for crassness.

Here’s the deal: BioTex Center for Reproduction advertised a Black Friday sale–3% discount on its surrogacy packages. The standard single is about $50,000.Hmmm. $1500 off doesn’t seem like much. 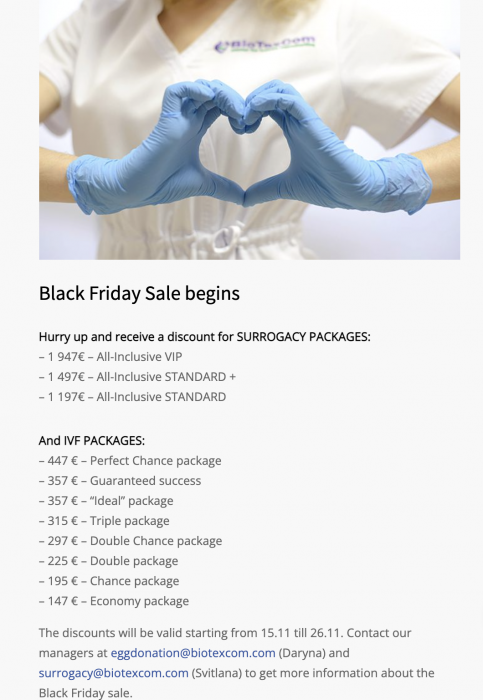 Bioex, located in Ukraine, is a big player in the international surrogacy trade. The company leaves our dearly beloved American Adoption Industry in the dust.  According to BioEdge, a bioethics newsletter, BioTex markets itself on Facebook, Twitter, and YouTube in Romanian, English, German, Chinese, Japanese, French, Spanish, Bulgarian (but not Russian or Ukrainian?  Well Bulgarian is close enough!)  It sponsors a baseball team and a juijitsu team. Clients can get a BioTexCom tattoo. Of course, this whole BioTex thing is creepy and vile and disgusting  I could write about surrogacy in general tonight, or Black Friday,  but I won’t.  Instead, I thought I’ll clue you in on the “pro-life” reaction to this Black Friday Sale  My favorite forced birth news site, LiveAction choked on its pearls. The site’s account of the sale was posted on other “pro-life” sites as well. (My bold)

Children are not products and neither are the women who are being paid to carry them for other people. But the billion-dollar fertility industry treats both as if they are nothing more than a way to make money. More lives are lost through IVF than are born and millions of human beings are frozen in time as embryos — some for decades. BioTexCom’s sale is further proof that the fertility industry doesn’t exist out of the goodness of their hearts, but out of the desire for profit…

..,.The child is immediately taken from the one person she has bonded with in the womb for nine months. That child knows the surrogate’s voice and heartbeat and will seek her for comfort. Being taken from her causes trauma…

And had the nerve to quote a woman  born of surrogacy:

And this WTF Tragedy and hardship quote

The children’s rights organization Them Before Us points out the major difference between adoption and surrogacy: “While both surrogacy and adoption involve significant loss for children, there is one critical area where the two family structures differ: adopted children are raised by adults who are seeking to mend the wound inflicted by tragedy or hardship. Surrogate-born and donor-conceived children are being raised by the very adults who inflicted the wound.” (Check out the weird title this qoute is take from.  Of course .written by the noxious anti-queer Katy Faust)

BioEdge weighed in with a short denunciation that garnered some comments, including:

Hannah Spanswick:  And here was me thinking that child trafficking was illegal!
It never ceases to amaze me that some unscrupulous people value money ahead of human life and dignity.

There is enough evidence throughout the world that testifies to the trauma of removing a baby from the woman who who has carried it and to whom it was born.

No amount of spin can change this reality and yet the trade in children continues with no care, responsibility or accountability by those who use these practices to enhance their personal wealth. I hope

I just hope that there is such Karma and these business tycoons are subjected to the same level of emotional pain as those upon whom they inflict it.

Joan A: Why is it lawful to treat women and the children they bare as second rate citizens. As Pauline above identifies, this represents the height of corruption and cruelty.

How low can we as humans go?

Of course, just switch out “surrogacy” for “adoption” and the narrative changes. drastically to mean just the opposite.  Get those adopters in the delivery room!  Get that baybee now! Stampede that mom out the door!

Years ago I attended a mini-conference at the Center for Adoption Law at Capital University in Columbus  I can’t remember what the topic of the conference was, but surrogacy got its own space in the program. A woman sitting in front of me, I believe a bio-ethics -professor or researcher from Catholic University, got really upset. The Catholic Church would never countenance anything like this. She went on, much to my amusement, that surrogacy treated women like baby-making machines. Was dehumanizing.  Cruel.  Exploitive. You know!  I couldn’t help myself,  I raised my hand and when called on I informed her that that is how a lot of first mothers feel  That they had been exploited, used, were baby machines for the privileged.   Unfortunately, I failed to mention the Laundries. She got really het up.   “Where did you hear that?”   Seriously. I can’t make this stuff up. And I gotta admit she got some eye rolls and snickers from other attendees.

BTW, in case BioTex sounds familiar, back in May 2020, about 50 of their babies got stranded in a hotel in Kyiv when the border was shut down due to Covid. Some possibly went into foster care if the surrogate refused to take custody. Live Action referred to BioTex back then as doing human reproductive trafficking. ” It is the purchase and sale of not just one, but two human beings—the surrogate mother and child.