NOTE: Scroll down for Bastard Nation Action Alert and how you can help stop tihs bill from becoming law.

Bastard Nation: The Adoptee Rights Organization, the largest adoptee civil rights organization in , urges you to veto SB63. This bill establishes an unacceptable tiered system for adoptees to obtain their original birth certificates which are currently sealed by the state. Instead of treating all adopted adults equally, this bill doles out favors based solely on date of birth.

(2) Adopted persons born in between those dates cannot access their original birth certificates without a court order or other special procedures.

(3) The bill also establishes a “subject to appropriations” voluntary state-operated “contact information registry”–an apparent scrap thrown to the blacklisted, who will be forced to enroll in a government program with the hope that an original birth certificate might be forthcoming if a birthparent consents to its release.

Bastard Nation: The Adoptee Rights Organization opposes legislation that denies any adult adoptees access to their own original birth records on par with all other citizens. 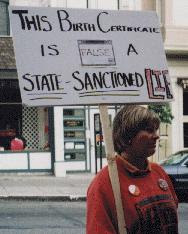 *SB 63 grossly discriminates against adoptees. The bill creates an arbitrary state-constructed blacklist, based solely on date of birth, prohibiting certain adopted persons from accessing their own original birth certificates. Those born before or after specified dates are permitted unrestricted access. Those born between those dates are blacklisted and required to seek a court order to receive their birth certificates.

*SB 63 revives and legitimizes debunked spurious claims of “implied promises of confidentiality” to birthparents. Such promises are an urban myth and have been disproved repeatedly by activists, legal scholars, historians, and by court rulings. In 30 years of birth record access legislation, no document has been presented to support “promises of confidentiality,” “privacy” or “anonymity”– implied or otherwise.

*SB 63 turns back the clock. In the last eight years , , , and have restored to adopted persons, the right to access their own original birth certificates. and have never sealed birth certificates. Other states are moving toward full restoration of identity rights for all adoptees.

*SB 63 stigmatizes the blacklisted. It forces them to seek a court order for what is rightly theirs: their own original birth certificates.

Please veto SB63 so that in the next session adopted adults and legislators can work together to fashion a bill that will treat all adoptees equally. Selective “rights” are not acceptable.

Thank you for your consideration.

Bastard Nation is the largest adoptee civil rights organization in . We are dedicated to the recognition of the full human and civil rights of adult adoptees. We advocate the opening to adoptees, upon request at age of majority all government documents which pertain to the adoptee’s historical genetic and legal identity, including the unaltered birth original birth certificate and adoption decree.