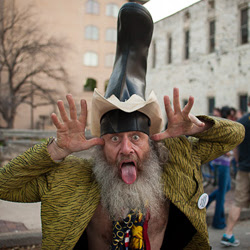 Thanks heavens the election is over!. Living in a swing state  I’ve been deluged for the last few days with phone calls from and Mr and Mrs Mittens,  Rick Santorum, Mike  Huckaabee, Clint Eastwood, Pat Boone  (a distant relative through adoption),  the Big O couple, and numerous underlings.  Frankly, I’m impressed that I’m so important.

Watching  the returns tonight–I forget on what station–I saw a demographic run down of who voted for whom.  White single women, married Christians,  20 something Hispanics ,etc. This got me wondering about Bastard democraphics.  From Facebook  it appears Obama got the Bastard Vote, (e didn’t get mine, but neither did Roimney, I voted for Gary Johnson and Vermin Supreme (left) for VP).

To facilitate my curiosity I created a Bastardette Poll in  upper left-hand corner. Blogger won’t let me do anything fancy, so I created 3 polls.  One for bastards, one for first parents, and one for adoptive parents. I tried to extend the poll to the end of the month but the app wouldn’t let me, so it closes around 4:30 AM on November14 around 4:30 AM.

The poll is anonymous, but if you;d like to post here whom you voted for and  why, that would be great. Your decision doesn’t have to be adoption-based, but if it is, we’re interested to know why and how adoption influenced your decision.