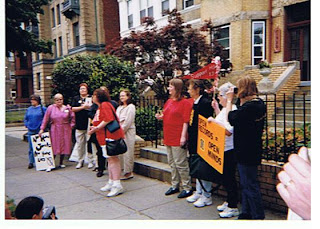 Back in the old days when Dr. Pierce was still with us, I’d often have dreams about the National Council for Adoption. The real NCFA, not what passes for it today. One of my favorite dreams was about the NCFA porch sale where original birth certificates were neatly packaged in plastic envelopes like the kind old sheet music is sold in, stacked upright in cardboard boxes, and sold for 50 cents or a dollar each. In my dream the weather was overcast and drizzling. Several people were on the porch, including Bastard National Diana Inch, rifling damp-fingered through the cartons for their obcs. If the documents weren’t on the porch, they were probably in the foyer of the old Dupont Circle rowhouse. In my dream I wasn’t surprised that the obcs were there; only that it had never occurred to me to look there.

Creator’s republishes old Ann Landers columns on Sundays. Yesterday an astounding column, originally published in 1999, made it back in print. The letter writer, Alison in Utica, New York, details the plight of the kicked-to-the-curb adoptee, not only rejected by her first mother and father when located, but even by a bio cousin. Unable to catch a bastard break Alison wrote Ann asking, “Please, Ann, tell me what to do!”
We veterans know quite well what Ann would tell poor Alison. In the parlance of Sharron Angle: man up!
Landers replied:
In some instances, an out-of-wedlock child represents a part of a woman’s life that she would like to forget.
I have long urged adopted children not to try to find their birth mother, saying, “The woman who raised you is your mother. Accept that fact, and don’t go around disrupting lives.

No surprise there. But she closes with the most astonishing revelation:

“A search, however, is OK if both parties are agreeable. The National Council for in Washington, D.C., has a national registry for such searches, for cases where a medical history needs to be checked out. But to those who are simply inquisitive, I say leave things alone.

The National Council for Adoption Family Reunion and Medical Registry!

Like in my dream, the scales have lifted from my eyes. NCFA only pretends to oppose records access so it can operate its clandestine, underground, super secret, top secret and no doubt pricey adoption registry and control who gets what.
Good Adoptees: yes!
Bad Bastards: no!
Just like the Illinois Adoption Registry and Medical Information Exchange only bigger and badder. And if my dream were true, as I’m sure it is, then it not only matches up Bastard with Mom and Dad, but certifies the results with the obc. Hold your hat in hand, keep your eyes on the ground, and send your non-refundable check today.