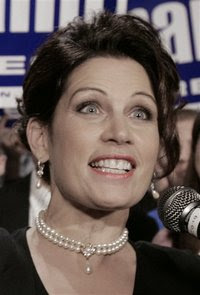 Max Blumenthal wrote a great piece in Tuesday’s Daily Beast (now repost all over the net) about Minnesota Cong. Michelle Bachman How a Minnesota congresswoman became a poster child for the GOP crack-up.

That’s just what I said when the National Council for Adoption announced that Bachman would be a keynote lunch speaker at its annual conference in Washington last month. (Go here and click on link to “conference” in the right sidebar. This is a pdf link with no dedicated URL).

I quickly looked her up. Outside of having impeccable credentials as a fundamentalist GOP nut job, I learned that she’d sponsored the Light Bulb Freedom of Choice Act, to repeal the nationwide phase-out of conventional lightbulbs by 2012.

I honestly don’t remember much of what Bachmann said at the NCFA lunch. Her subject was mostly foster care, which she is apparently qualified to speak on since she was a foster parent of 23 (mostly teenage) girls, as well as popping out a few kids of her own. According to her Wiki profile she believes that the troubles that her foster charges had were the fault of the public schools:

I began to realize as I studied aspects of their assignments that these attitudes and behaviors could be traced to their curriculum.
I guess abuse, neglect, family break-ups, home-hopping, and dysfunctional foster mothers don’t count. 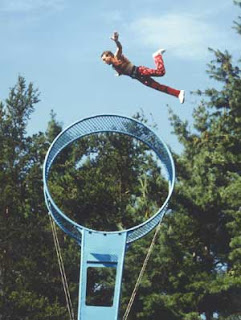 OK, I lied. I do remember one thing about Bachman’s lunch talk: frequent references to her biological children as “biologicals” and the disturbing images that danced in my head when she spoke several times of “launching her biologicals” (into adult lives, more or less).

I filed Michelle Bachman away as just another whack job on the taxpayer dole. In my other work I meet a lot of those people.

But then Blumenthal’s blog hit!

Though the piece has nothing to do with adoption, it’s important to know that this is the type of adoption and foster care advocate that somebody at NuNCFA likes and thinks is OK to let in the door. Maybe they’re channeling Dr. Pierce.

Rep. Michele Bachmann, a Republican from Minnesota, is now notorious for an incident on the October 17 edition of Hardball. Bachmann told Chris Matthews she was “concerned” that Obama “may have anti-American views,” and linked him to a Who’s Who of leftist agitators, from William Ayers to Saul Alinsky to Ward Churchill. “I wish the American media would take a great look at the views of the people in Congress and find out, are they pro-America or anti-America?” Bachmann said…

…In 2005, while serving in the Minnesota state senate, Bachmann crept surreptitiously to the perimeter of a protest against a bill banning same-sex marriage. She ducked behind a bush, and for several minutes, Bachmann and a staffer observed the rally like spies. When a demonstrator approached the half-hidden Bachmann with a camera in hand, she scurried away, jumped in an SUV, and bolted from the scene…

…. During a St. Cloud Times podcast in early 2007, Bachmann claimed exclusive knowledge of a secret Iranian plan to partition half of Iraq. After meeting Gov. Sarah Palin last summer in Alaska, Bachmann declared that “warmth” from a pipeline running through Alaska’s Arctic National Wildlife Refuge would make the area a “meeting ground and ‘coffee klatch’ for the caribou.” Just months later, during a House hearing on the mortgage foreclosure crisis engulfing her district, Bachmann read aloud from an editorial blaming “blacks and other minorities” for causing the epidemic…
And, then there was the time angry lesbians attacked her in the bathroom!

Dump Michelle Bachmann, the definitive dishy Michelle Bachman cite, writes that the Congresswoman is so far out there that she may be tanking the campaign of incumbent Senator and NCFA Adoption Hall of Famer Norm Coleman who’s in a tight race against Democratic challenger Al Franken.

On Sunday, on the same local morning TV news show during which Bachmann reiterated her comments about Barack Obama, Coleman tried to distance himself from them.

But distancing himself from her isn’t so easy after he’s been appearing by her side at McCain/Palin events throughout the state. 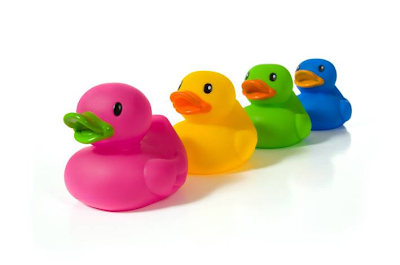