Focus on the Family’s Citizen Link informs us tonight that The Christian Alliance for Orphans has set up Orphans Deserve Better, special webpage for Orphan haters. We mean the movie Orphan, not orphans per se, but once the movie comes out, who knows? The way the anti-Orphan gangbangers are behaving I halfway expect to see mobs in overalls marching house-to-house waving pitchforks and torches hunting down evil orphans.

Especially since our Esther rejects her Christian Alliance for Orphans God-loves-me role:

Did you know that orphans are put on earth specifically to experience God’s love. That’s what The Christian Alliance

Motivate and unify the body of Christ to live out God’s mandate to care for the orphan with the vision to have every orphan experience God’s unfailing love and know Jesus as Savior.

CAO’s Jeff Medfind goes over the top in his Orphans Deserve More video appeal complaining that the film suggests that “orphans are damaged goods and adoption can destroy your life.”

Loving an orphan can lift us up from selfish routines and petty concerns and give us a deep joy that no vacation or new car ever could. 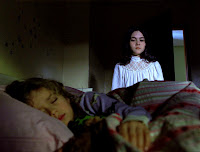 Some adoptees, based on their personal experience, would disagree.

The moral panic Orphan has induced is more entertaining than the film itself, which will pass into oblivion and DVD a month after release. The “outrage” is an opportunistic moment for drum banging and fund raising. What better way is there to make publicity and $$$$$ for yourself than to create a victim where none exists? The Orphans Deserve Better website and petition (this is separate from the Boycott “Orphan” Movie petition) is clearly a set-up to collect names for money and conversion.

For once the grand poobah of adoption, the National Council for Adoption, has shown some sense and has refused to get involved. We’re expecting to see a PETA campaign any day now, though.

It’s a B movie folks! In real life there are real orphans who need real help and real families. These real children are being co-opted by privileged self-righteous do-gooders and Bible oil salesmen pretending they can’t tell the difference between real orphans in some poverty stricken orphanage in Cambodia and a pretend orphan in a movie. Are these the people we want promoting orphan care and orphan adoption?

Addenda: Check out Orphans are Scary on MamaPop. Thanks Kurt!