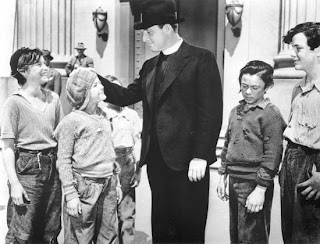 Catching up on today’s abandoned babies stories, I found Police search for abandoned infant’s mom in today’s Chicago Sun-Times, a follow-up on a newborn recently discovered in the unheated vestibule of an Uptown apartment building. Thankfully, the baby is doing fine.

But at the very bottom of the article under “Related Blogs”this gem, dated November 17, 2008 is linked to the story courtesy of Carbolic Smoke Blog: Number of children abandoned under Nebraska’s safe haven law jumps from 34 to 852 when Father Flanagan drops off orphans from Boys Town at local hospital.

Witnesses say Flanagan was “downright giddy,” rubbing his hands together and laughing. He told befuddled hospital workers that “the kids are your responsibility now. It was either this or bankruptcy, so they boys had to go. This will give me a chance to reorganize and turn Boys Town into something profitable, like a Walgreens.

I’ll have some genuine good news from the Nebraska Fiasco up this weekend.