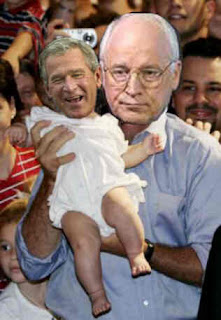 Those of us of a certain age from the Cleveland area will remember the Frankie Yankovic hit Too Fat Polka. I was reminded of that song when I read the responses to my recent “Say It Ain’t So, Joe” blog which discussed conservative writer Joe Sobran’s suggestion that George W Bush should have been put up for adoption. Bastardette sent the link off to Sobran who wrote back: “You never know whom you’re going to offend these days!” But don’t blame Joe! Like the rest of the country, he’s been indoctrinated with the belief that adoptees are mindless little flits with a high tolerance for bullshit–happy to settle for dog scraps as long as we’re watered and papered occasionally. Though the comments are hardly a scientific survey, it is clear that our Dear Leader would not be welcomed with open arms if he were to cross the border–legally or not– into AdoptionLand, not to mention Bastard Nation. More like pikes and sticks. It appears sadly, from the picture on the left that Little Georgie is somebody only a Dick Cheney could adopt.

I’m very far behind in blogging. As usual, I’ve got some half-baked blogs in the oven (which is better than half-baked buns except if you’re desperate and baybeeless).