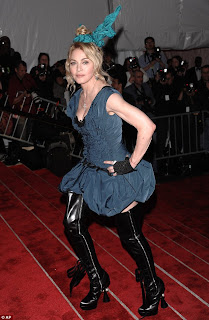 Thanks to Lorraine Dusky for this heads-up on Madonna’s May 5 appearance at the Metropolitan Museum of Art’s Costume Institute Ball with boy toy Jesus Luz. The article was published the next day in the London Daily Mail under the headline Is this really a suitable dress for someone trying to win an adoption case, Madonna?

Well Bastardette answers with a resounding NO, especially since Madge debuted Louis Vuitton’s cartoon the day after her adoption appeal hearing in Malawi. Aren’t’ those boots sweaty? And what’s on that her head? A flying fox bat?

There’s a lot to say about this, but why take the time when the Daily Mail (go there and here for more pictures!) says it all:

One would have thought that Madonna would invest her time and energies into getting her house in order to ensure she has every chance of success in her bid to bring Mercy James to the US to live with her.

Instead, she wore an outfit that breached the limits of vulgarity, and displayed her typically arrogant thinking.

And not only that, in another move which may not help her case, she also chose the high-profile fashion event to début her romance with model Jesus Luz, who at 22 years old is 28 years her junior.

And from Mercy James’ father, James Kambewa who is now seeking custody:

Speaking exclusively to the Daily Mail last week Mr Kambewa, who earns just £23 a month as a security guard, said: ‘I don’t think Madonna is a model mum.

He told the Daily Mail: ‘Madonna has millions of dollars but that doesn’t make her a good mum. Parental love is more than money.’

‘How can a woman of 50 dance almost naked on stage? I wouldn’t want my daughter to grow up like that!

‘In Malawi women respect themselves. Cultured women do not go about half-naked.’

There’s lots of comments including these, which take up where the Daily Mail signs off:

Who’s brave enough to tell Madonna her dress is tucked up in her knickers?
… Alice, Barcelona, Spain

If ever there was a case for authorities to deny Madonna adoption its that photo!!!this woman is very sad and desparate!!!was it fancy dress ?can someone not advise this silly woman at her age to dress properly!??between grass dresses ,or next to nothing outfits the woman is a complete mess!!
…christine, Glasgow Scotland

That’s her toy boy? How silly of me, I thought that was the latest child she was adopting.
,,,Karen, Midlands England

no one has the guts to tell her she looks stupid
…Andrew ex pat, Paris France 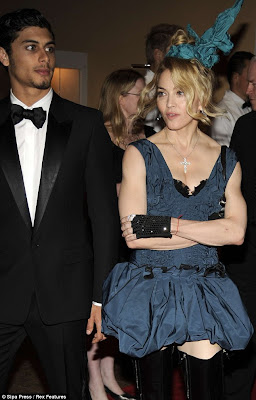 18 Replies to “WHAT IS MADONNA THINKING?”