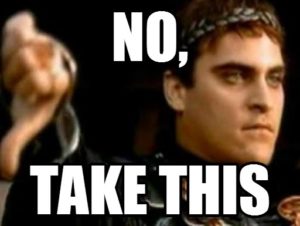 Last Friday, New York Governor Andrew Cuomo, after months of silence, vetoed A05036b/S04845b, the so-called “adoptee rights” bill that if signed would have made the already cumbersome and convoluted process for adopted adults to access their own original birth certificates even more difficult.

The bill, sponsored by Rep David Weprin, was marketed as an adoptee rights/open records bill. But instead of addressing adoptee inequality, due process, and discrimination, the bill continued New York’s 80-year history of abrogating the right of adopted adults to their own state-held birth records.

The bill, which contained no mechanism for funding its proposed giant bureaucracy,  included:

The bill was unwanted– forced on AdoptionLand by Rep Weprin, who vowed, after years of legislative wrangling and stonewalling in Albany, to pass “something” this session—even if nobody wanted it. Some lawmakers held their noses and voted for A05036b and its Senate companion, claiming “something is better than nothing.” (Hint: it’s not where rights are concerned.) One House co-sponsor, after talking to adopted constituents and allies, pulled his support.

A05036b/S04845b received virtually no support from the adoptee equality/rights and adoption reform community.

Last June over 45 state, national, and international adoptee equality/rights, adoption reform, and foster care advocacy organizations signed a joint letter of opposition.  Several hundred individuals also signed.  Since then, opponents sent hundreds if not thousands of emails, faxes, postcards, letters, and tweets to Governor Cuomo, and made calls to his office asking him to veto. We do not have statistics, but Cuomo staffers say they were flooded with calls to kill the bill. They say without our veto campaign Cuomo would have signed the bill.

Having to navigate the cumbersome process set forth in this bill may only add to an adoptee’s hardship, including delays resulting from the lack of any identified funding source necessary for the Department to search for and identify birth parents.

Importantly, Gov. Cuomo actually listened to us. He indicated in his veto memo that he not only “disapproved” the bill, but he wants future action taken. He directed the New York State Department of Health to establish a work group of “diverse stakeholders” to study the issue and make recommendations for future action. Work groups tend to go nowhere. It’s where “controversial” or unpleasant issues are sent to die, but we are not going to sit by idly and let  the restoration of our rights be shuffled off to Buffalo–or a dimly-lit smoked-filled room in Albany. We take this mandate seriously. More on that later.

The ink wasn’t yet dry on Gov. Cuomo’s veto memo when our resident naysayers piped up. You know, the Benedict Bastards of the adoptee rights movement who will gobble up any scrap if their name is on it.  The loudest neighing came from Colorado’s Rich Uhrlaub, currently pushing H357 in Florida, a state which, as far as we know, he has no ties to.  If passed, that bill would require some adoptees to be in their 40s before they are  “allowed” to have their own birth certificates.

Compared to Uhrlaub, Bill Pierce and the National Council for Adoption in its anti-adoptee heyday were pikers. Uhrlaub claims irrationally that adoptees do not have rights– that adoptee access to OBCs and other state-held adoption documents is not a right at all, but a matter of tweaking adoption procedure and process! The ability to access our OBCs, etc. already exists, he claims straight-faced, and is recognized (for instance via court orders). Access, it seems, has just not been interpreted or utilized correctly by legislators, policy wonks, courts, and bureaucrats –or something like that. Using Uhrlaub’s  logic, woman suffrage or the Civil Rights Act of 1964 were about legal tweaking, not voting rights.

Uhrlaub, writing about New York on his personal Facebook page   (but not on any of the “activist pages” he runs)  called himself an “observer.” He admitted that he did not participate in the New York oppositional campaign except to sign the joint letter.    Yet, he felt compelled after the fact, to criticize our campaign and specifically certain high-profile members of it, implying that promoting the “right” of adoptees to unrestricted access endangers the adoptee rights movement and generations of future adoptees. He was careful, though to avoid  the scary words “rights”  and “adoptee rights movement,” which he has elsewhere declared” intimidating.”  Oddly, the Occupy Adoptee Rights Florida FB page he curates posts memes sporting adoptee rights slogans. 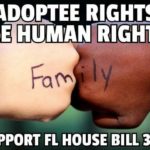 So, apparently, those of us who have fought long, hard, and successful battles for unrestricted access  (including killing dirty bills), but according to him don’t know much about legislation and bill passing are now expected to lickety-split clean up the toxic dumps he and other deformers have and continue to plant throughout the country in the name of expediency, backslapping, and media whoring. Uhrlaub, in fact, has dubbed us “AONNs” –All or Nothings– for demanding all adoptees be treated equally under law. It is certainly the first time we have seen equality used as an insult.

But today’s veto now places tremendous pressure on the AONN camp to produce. If they are unable to do so, they will be responsible for denying thousands in the next generation of NY adoptees OBC access based on a significant prospective shift in the presumption of the law, which would have been created by the following language posted in the comment below. (see his FB post for citation)

Arguing that it is OK for some adoptees to be left behind; that is, have less rights than the rest (or does he mean privileges?  Uhrlaub continues:

To put it in perspective, the number of children adopted in NY in just one year is more than double the total number of non-disclosure requests filed by birth parents across eight states, according to statistics collected by NJ-CARE

Note that recently NJ-Care sold its own constituents down the river with a restricted OBC Disclosure Veto law that blocks the release of OBCs to selected adoptees. The law not only denied approximately  550 New Jersey adoptees a right to their own birth certificates but forced first mothers who wanted to remain anonymous through the DV option, to turn over their personal medical histories to state bureaucrats who would then pass on the information to their black-holed progeny. What advice would Uhrlaub give these 550 let-behinds?

Be happy for everybody else?

We don’t know if NJ-Care invented the Uhrlaub analogy,  but should we be surprised? In 2009, at the joint American Adoption Congress-Adoption Network Cleveland conference,  NJ-Care leader Judy Foster shouted out during a Q&A after a keynote presented by former Maine Senator Paula Benoit, sponsor of her state’s unrestricted OBC law, that “one-size-fits-all” access is “communistic.”

The New York campaign with its oppositional united front, unity message, and Cuomo’s subsequent veto set an important historical precedent.  To the best of our knowledge, no access bill good or bad has ever been vetoed by a governor.  Yet, the naysayers,   attempting to paint their self-proclaimed prestige and anything goes ( should we call them, AG–Anything Goers?) compromise agenda as the “smart” way to go, act like the Cuomo veto is an adoptee rights defeat, when it is, in fact, a historic victory.  Not as great as unsealing New York, but a great leap. 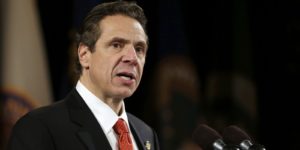 Bastard Nation would like to thank each and every individual and organization who participated in this historic, and for some, surprising victory. We could not have done it without you!  Despite what deformers claim, killing bad bills is just as important as passing good bills.  It’s what genuine adoptee rights activists do.  Once bad bills become law–especially when they create new rights for others as the New York measure did with its “parental consent” mandate, it is nearly impossible to fix. We are especially grateful for Greg Luce/Adoptee Rights Law Center and New York State Adoptee Equality for the tremendous and exhausting work put into this battle.

Please drop Gov,  Cuomo a line to thank him for listening to us and his support for passage of a clean bill in New York.