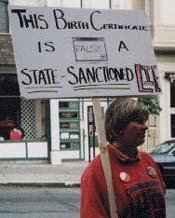 The original intent of SB 0004 was to restore the right of birth record access to all Connecticut adoptees no matter when they were born or adopted. The bill on your desk guts that intent. It makes access prospective only–that is, for those adopted on or after October 1, 2006. It denies to thousands of Connecticut adoptees, based solely on their adoptive status and date of birth, the natural right of identity and the legal right of public records access to their own birth certificates.

Tiered rights systems such as codified by SB 0004 are open to legal challenge. SB 0004 creates a class system in which adopted persons are segregated and treated different from everyone else (the non-adopted). To add insult to injury, it treats some adoptees better than others. What makes a person adopted before October 1, 2006 less worthy of rights than someone adopted after that date?

SB 0004 is a mean-spirited, ugly discriminatory bill. It is a slap in the face of every person adopted in the state of Connecticut. Go back into the drawer! Be grateful! Shut up!

Adoption is supposed to be about the “best interests of the child,” but when that child grows up he or she apparently loses “best interest” status.

Why is it when adopted persons become adults the mythological “interests” of other parties (adoptive parents, birth parents, and whatever other interest crawls out of the woodwork) takes precedence over our interests and our rights? Adoptees want to be treated like everybody else. When will the government stand up for our rights? When will adoptees count?

Please veto SB 0004. Send this wretched scrap of a bill back to the legislature and tell it that Connecticut does not discriminate against its adopted citizens. Ask the legislature to come back with a clean bill with unrestricted access for all adopted persons that acknowledges and supports full citizenship for all the state’s adoptees–not just some. It’s the right thing to do!