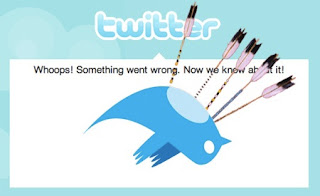 I’m keeping Twitter since I get hits from it, I’ve been forced to open a new account. I can’t delete the old account because it won’t let me in.  For those so inclined please go to the left Twitter thingamajig and subscribe. I can also be found under marleygreiner in the Twitter directory.  I wanted to use “Daily Bastardette” but Twitter wouldn’t let me.  Figures.

Now if I can just figure out how to add the new Google “share this” icon. It went up automatically on one of my blogs, but not the rest.

One Reply to “Twitter Fail – Why is this considered "convenient?"”