Someone posted this on the Facebook Adoption News and Events page: 10 Keys to Using Positive Adoption Language   The original positive adoption language spiel was bad enough, but Rachel Wallace Reid, Certified Montessori Teacher and Parent Educator, author of this piece of drivel, has raised the ante to a whole new level of prissy absurdity. Perhaps she read too much Ionesco in college.

The adoptive parents are the “real” parents.  The real parents are the grown-ups who will take care of the child every day and for the rest of their lives.  When referring to who gave birth to the child, simply say birth parents or birth woman.  A biological father is not referred to as the real father, but the biological one. 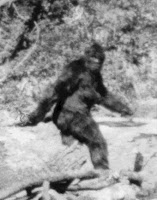 Birth woman?   It makes me think of Big Foot in a dress dropping babyees in the woods  I am  birth woman, hear me roar!

And biological father?. Why not Birth Man?   We wager that the Birth Man population is greatly undercounted, and if a proper census were taken, would far outweigh that of Birth Woman who just happens to be a handy recipient of Birth Man’s love. It only takes him a few seconds to accomplish his task;  it takes her nine months not counting the aftershocks.

Boy Howdy  though!  I’m really attracted to the idea that “real parents” take care of their children for the “rest of their lives.”  If you’re not getting support, sue!

Adoption is an event that happened in a child’s life when the child joined his or her family. Using positive adoption language, notice use of verb tense. The child “was” adopted that the event is past tense and already happened. To say that a child “is” adopted implies the process is still ongoing. This is not true. We would simply say, “George was adopted.”

That is,.unless your birth certificate is sealed and you have to grovel before a judge to get it–or worse, grovel before an entire state legislature full of (depending on their excuse d’jour)  right-to-lifers and phony civil libertarians to get what’s yours. They’ve got theirs.

That is,  unless you can’t get a driver’s licence, Social Security check or passport  because your chain of identity is broken by a fictional state- forged birth certificate that some bureaucrat red flags..

That is, unless you were adopted in Columbia and you get picked up by ICE and are deported because  your forever parents didn’t get around to making you a US citizen.

That is, unless  your aparents die and your’re listed in the obit as their “adopted daughter Ginny and adopted son, Jerome.”

Using positive adoption language, we would never refer to a child as “adopted” just as we would never say an IVF baby, a failed contraception baby, or a c-section baby.

The truth is that adopted people are different and will always be different. In 44, (soon to be 43) states we can’t even get our own birth certificates.That’s something to be really upset about; not  whether  we “is” or “was” adopted.   Let’s face it. Adoption is not a normal way to make a family.  If it were, adoption  wouldn’t be masked by family and state-created lies and dependent on big money transfers.

Positive adoption language is created to obscure the truth about adoption and its politics; thus, negating the adoption experience for the bastard and his parents, and more importantly,  for the PC languager herself.  Conversely, and perhaps subconsciously, it allows the language diddler to deflect the narrative to herself and enable her to create a new one, more fit for her emotional  and maternal needs. (I say “her” because men usually have more important things to diddle at)

Positive  language hides the genuine life-long adoption/adoptee  process, terming  it a “one-time experience.”  Positive Language  hides the players with awkward phrases. Birth Woman (which. I can’t imagine anyone but Ms Wallace Reid using), strips bastards and their mothers of dignity and humanity.Biological father,” a PC phrase for the preferred Sperm Donor, ignores the fact that, despite my earlier comments,  many men have been driven out of the picture by predatory adoption agents and lawyers, and to be honest, by some women and their families who want to hide children from fathers for whatever reason.

Positive Languigers are at heart anti-adoption, not the type of anti-adoption harbored by women who have been exploited and screwed over, by the adoption industry but by women (and it’s usually women) who have benefited from that same industry.  Positive language enables them hide their personal doubts about their status of adoptive parent. . They are trying to neatly cover up adoption, hoping to turn it into Ms. Wallace Reid’s irrelevant c-section. A sort of blank slate for adopters.

Of course, language is important, but it must convey truth. or at least attempt to.  Denying that adoption is nothing more than a trivial one-time event as well as the other rules  keys to positive  adoption language posited by Ms Wallace Reid and other language wonks are an insult to those of us who live adoption. Has Ms Wallace Reid even spoken to an adult bastard?

18 Replies to “How Did We Ever Survive Without Positive Adoption Language Diddlers?”