Over the last few days, Bastard Nation has been attacked by a group of deform advocates, mostly from Missouri.  Their clean bill,which we supported, went south with them in the driver’s seat, and they’re blaming BN because they lost control of their bill.

The Missouri situation is quite baffling. Missouri Open Records Movement, (SMARM) had a beautiful clean bill pass out of committee.  A Bad Bill backed by Catholic Charities and Lutheran Family Services was introduced to counter the Good Bill.  It, too, passed out of committee.  According to SMARM, Bastard Nation’s sin (along with CalOpen, which for some reason isn’t getting the heat we are) ), was to send out an Action Alert and contact leggies to ask for a Do Not Pass on the Bad Bill,  According to SMARM, supporting the Good Bill and opposing the Bad Bill “confused” lawmakers!  Seriously!…Seriously.  Apparently somebody figured if the Bad Bill, backed by SMARM’s big-bucked mortal enemies  that pounded them each session for decades would just melt into the floor if nobody brought it up with lawmakers. Now Missouri adoptees are confronted with a Bad Bill amended by disclosure vetoes and other smarmy attacks on the rights and integrity of Class Bastard. SMARM groused for two minutes, then embraced the bill as “the best it will get.” Their solution is to bring a class action suit.

Now, anyone who criticizes SMARM or the compromised DV bill gets bounced from SMARM’s FB page and attacked in other fora. This weekend certain Bad Bill supporters took it to another level with a smear campaign against Bastard Nation and our work. posted on the First Mother/Birthmother blog. Normally, we ignore this kind of campaign, but we’re feeling rather Howard Bealish lately.   For nearly 20 years we have done what we said we would. Introduce, promote and support clean bills. If they go bad, or are bad from the start, we work to kill them, Why this surprises deformers I don’t know. And why deformers  get all bunched up  over us working and succeeding in what they claim they want  (unrestricted OBC access for all) is one of those great mysteries of AdoptionLand.

Oh, I nearly forgot. Most of SMARM’s leaders aren’t even adopted.  They are birthparents, adoptive parents, and related to adoptees.   Hmm maybe it’s not such a mystery then.

So that’s a quick background of our post below. It was written by BN ExeCom Secretary Emm Paul

In an attempt to put Bastards in our place, first mother Lorraine Dusky has allowed this comment to stand in her blog without rebuttal, although our executive chair Marley Greiner immediately wrote one. Since our FB page is open to the public for reading purposes, I thought I’d nip this in the bud here.

Bastard Nation is an actual non-profit organization. We are registered in good standing with the Secretary of State in Washington, which apparently this commenter who is hiding behind an anonymous name failed to find on Google. Bastard Nation isn’t “2 people on the internet trying to mess up things for hardworking activists like Heather Dodd”.

Since our inception almost 20 years ago, we have had an Executive Committee, a Legislative Committee, a Membership Committee as well as Legislative Liaisons in multiple states. We aren’t just a Facebook page on the internet. We have a mission that we have been faithful to in all this time, which is restoring the equal and civil rights to ALL adoptees. We have not and will never compromise the rights of ALL adoptees to appease the select.

As for the assertion that we “have no money”, well if that’s true, so what? When we did away with membership fees some years ago, it’s because a small group of dedicated Bastards pledged to pay all of our yearly operating expenses when needed. The “haves” wanted to include the “have nots”, so that ALL Bastards would be able to have a voice in REAL activism.

Unlike other so-called “activists”, none of us are paid, nor are our expenses paid for on the backs of our membership. We haven’t made careers out of defrauding the government and profiting off of desperate searching adoptees nor have we made careers out of pimping our abandonment of our children. We have re-opened the Bastard Boutique, but every single piece of merchandise was donated to benefit our Who’s Next? Fund.

Unfortunately, a good part of our resources—time, experience, money—has been spent in the last few years fighting dirty bills such as the one being promoted by deformers Lorraine Dusky, Heather Dodd and the leadership at SMARM. We would much rather be introducing clean legislation, but we only have so many resources to go around.

We have proven that it can be done, while they haven’t done a single thing for adoptee rights. The colonists and deformers need to stop speaking for adoptees. They don’t care about our rights. Look to see who profits in what they do, versus in what Bastards do, and tell us again that WE’RE the “bad guys”. 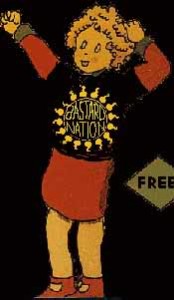