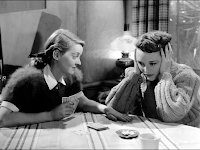 The Great Lie is one of Bastardette’s favorite adoption films. What’s not to like about a good old-fashioned Hollywood cat fight? Especially when its between inconveniently pregnant career woman of mature years with a butch haircut “Sandra,” and softly coiffed Maryland horse farmer of pap entitlement, “Maggie?”

My initial viewing of the film about 25 years ago, pre-bastard consciousness, put me squarely on the side of Davis’ pappery and amommery. I mean, are we really supposed to root for somebody who prefers Tschiakovsky over motherhood? When I watched the film again in the mid-1990s, I’d turned completely around. Sandra was my new hero, who even as she acquiesces, still has the moral victory over whiney wifey, who’s gonna spend the rest of her life looking over her shoulder. I can’t wait for “Peter” and “Pete, Jr.” to learn the truth 20 years later. If nobody else tells them I will!

Here is what I wrote about the film in The Happy Family (part 3 of “Scarlet Women, Bastards, and Happy Families,” published in the Winter 2001 issue of the Bastard Quarterly. Re-written from the original to correct a mistake.

A not-so-tolerable and often disturbing relationship is explored in The Great Lie, a film that subtlely turns the birth mother/adoptive mother stereotype on its ear. First wife/concert pianist Sandra Kovac (Mary Astor) and second wife/horsy set Maggie (Bette Davis) form a symbiotic relationship—an odd couple, after their shared husband, Peter Van Allen (George Brent), is reported missing in a plane crash in the Amazon region. Unlike today’s uneasy gal pal feminist films, (or The Old Maid) where enemies at least come to respect each other, Sandra and Maggie, operate their Mutual Aversion Society throughout the film.

Sandra, married to Peter during a night of heavy clubbing, finds herself pregnant after their quickie divorce and his subsequent even quicker marriage to true love, Maggie. Career or motherhood? It never seems to be a real question for sophisticated Sandra who looks good in beaded dresses and has a personal hairdresser. Jealous of Sandra’s fertility, though she had shown no previous penchant for motherhood, Maggie grabs at the chance to take the baby off Sandra’s hands. Maggie fakes her own pregnancy, and spirits Sandra off to a shack in Arizona where the two play house in some beautifully bitchy scenes written by Astor and Davis. 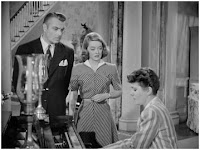 While Sandra is ambivalent about her own baby, Maggie attaches herself to Sandra’s baby in utero, seemingly convinced that God make a mistake putting the Van Allen baby in Sandra’s tummy instead of hers. Maggie, cloyingly concerned about Sandra’s health, takes control of her rival’s life, setting up a prissy regimen, and demanding that Sandra pay the price for her fertility–or more likely, her fling with Peter. No drinking, no smoking, no onions. And plenty of vitamins. Sandra, who likes to refer to herself as a “healthy woman with a healthy appetite,” retaliates by slouching around in a terrycloth bathrobe, smashing classical 78’s, and wanting the whole unpleasant business to be over with. The greatest moment of the film comes when Maggie and Sandra get into it during a desert wind storm and Sandra, trying to burn down the house gets two slugs in the face from Maggie. (NOTE: If you are pregnant and considering moving into your pap’s home, watch this film first!)

After the birth, Maggie returns home with “her” baby, whom she promptly deifies as Peter Van Allen, Jr. Sandra goes on an overseas tour. Both women are determined not only to avoid each other, but to ensure that no one, not even the baby, will ever know the truth. As fate would have it, the missing Van Allen Sr. is mysteriously recovered in the Amazon and returns to Maggie and his new son, dumb to what has transpired between his wives. So dumb, in fact, that he is eager for this odd menage to pal around together. The climax comes when Sandra visits the Van Allens for a weekend, planning to out Maggie and snag Peter for herself through the baby. In some touching scenes, Sandra emotionally connects with her son for the first time, especially when she learns that he already has an ear for music. Maggie frets, eyerolls, and whines over the impending loss of her illegitimate family. At the last minute Sandra decides to take the moral high road. Watching Maggie, Peter and the baby together in a family scene, she announces she must return to the city; thus sacrificing her own happiness and mother love for the sake of her son’s future with the only family he knows.

Some kind person has put the two cat fights together on YouTube. Enjoy!