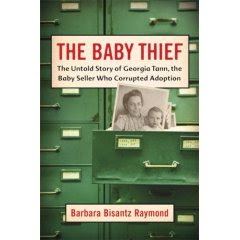 The Baby Thief : the Untold Story of Georgia Tann, the Baby Seller who Corrupted Adoption by Barbara Bisanz Raymond will hit the stands on May 5. And oh what a book it is!

I’ve known about this book and its various incarnations for a long time. In 2001 Barbara sent me an early draft. Unfortunately, this was around the time of my prolonged stay in Eugene and I didn’t follow up on it like I should have. I am happy to say, though, that Barbara did, and the result is a fascinating but sickening account of how adoption got to where it is today.

For those of you who aren’t familiar to Georgia Tann, she was a baby thief who worked her evil with the full knowledge of courts, social workers, and politicians. Between 1924 and 1950 she arranged 5000 “adoptions”–many of them of children she’d kidnapped or obtained by other illegal or unethical means. Tann stole from the poor to sell to the rich. Sometimes she just gave babies away to the child-hungry denizens of Tennessee’s power structure, all too happy to turn their backs on justice in order to fill their nurseries with undocumented children to call their own. As part of Boss Crump’s Memphis machine Tann’s political influence in Tennessee was immense and unheard of for a woman, even now.

Raymond argues that Georgia Tann invented, popularized and commercialized adoption as we know it today with its secret closed and codified system of identity erasure and falsified birth certificates.

Tann’s influence did not end with her death in 1950. It is carried today by the approximate 6 million adopted persons and their birth and adoptive families in the US (and more in Canada) whose records remain sealed by the state.

The Baby Thief an important book that every adoptee rights activist, every first mother activist, and anybody who wants to clean up adoption should read and carry with them to the statehouse. Interest, however, should move beyond AdoptionLand and into the areas of women’s studies, GLBT studies, child welfare, true crime, and Southern and localized history.

I’ll be writing an “official” review of The Baby Thief next month, but in the meantime I urge you all to order a copy now. You won’t regret it!

3 Replies to “THE BABY THIEF: AN INFORMAL REVIEW”