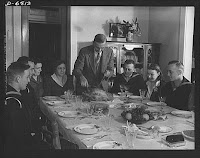 I hope you all had a Happy Thanksgiving. Since Bastardette regards cooking something people are paid to do, BF Bastard and I did China Dynasty this year. Big Chinese buffet along with turkey, mashed potatoes and gravy, dressing, and some knockout maple syrup mashed sweet potatoes. I considered taking pictures of my meal to post here, but that’s just so….Facebook!

Since everyone is saying how grateful they are this season, I suppose I should add my two cents: I am not grateful for the legislatures of 44 states and their industry bullies and hangers-on that continue to treat bastards as chattel. I’m grateful, however, for my Bastardette buddies, Bastard Nation, good friends, family, and the Bad Cats.

But most of all, I’m grateful for celebrity adopters, the true heroes of National Adoption Awareness Month. Without them, adoption would be as popular as the wringer washer, the buggy whip, and beta videos. Their altruistic acts of child gathering are an inspiration to middle America. Adoption = upward mobility. There’s a little bit of Hollywood in each of us, and what better way to live like a star than to adopt.

Jim Hamilton posted this on nu.adult.adoption on Facebook and it’s worth re-posting here as NAAM wears down: a photo album of 110 Celebrity Adopters. As Jim wrote: bring on the towel!

Whereis Zazu Pitts? She and her husband Tom Gallery adopted Marvin Carville LaMarr, son of Zazu’s close friend silent screen actress Barbara LaMarr (“the girl to beautiful to live”) after LaMarr died in 1926 of TB and nephritis aided by mean smack and coke habit. Gallery grew up to be a prominent LA-based boxing promoter, actor, and TV sports executive. A couple years ago he told the LA Times that he’s writing a book about his mother.

Inexplicably, Jane Russell is off the A List. Russell (dated BF Bastard’s uncle before Howard Hughes snatched her away) and husband football star Bob Waterfield, adopted three children. For decades she was an active adoption promoter, especially international adoption. She founded WAIF (World Adoption International Fund –no webpage) that is reported responsible for the adoption of 51,000 babies.

If I were to be adopted by a celebrity, I’d choose Jamie Lee Curtis and Art Buchwald, though not as a couple. Christoper Guest might object and Buchwald is dead. If given a choice between Madonna and Rosie O’Donnell, I’d take Madonna. She’s got a good art collection and great underwear.