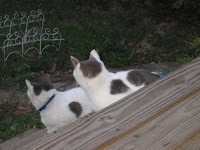 I’m doing some editing and research today. I don’t have much time and asked the Bad Cats, Abbie and Jonathan, to write my blog. As foundlings themselves, they are very sensitive about adoption, especially their own. All we know of their past is that their mother, suspected of being an undocumented Siamese, was allegedly run over by a horse trailer in West Virginia when they were but a few days old. The babies, and their brother Tiger, were rescued by Bruce, Brenda, and Sean and, brought to Columbus. Eventually they ended up with me.

The kitties wanted to tell their own story. They spent the day scouring the ‘net hunting down possible relatives and friends of their mother Unfortunately, their drive-by dad is unknown. Everyone they talked to either clammed up at the words,” Iz youz my famblieez?” or told them to “shutz yer trap, be grateful you iz in Columbus, Ohio and not on a farm outside of Buckhannon eating micees.”

The poor kitties were so traumatized they had to double up on catnip and take to their respective beds in their respective rooms. (They suffer huge attachment issues and refuse to share a bed, much less a dinner.)

Up until today, although missing a piece of their lives they were content with their lot. Being “chosen” they were “special.” A princess and prince. Now that they know they are on the same level as human adoptees they are hissy-pissed, locked and loaded.

2 Replies to “KITTIES SPEAK OUT ABOUT ADOPTION”