In Columbus this summer a Grove City-area woman “surrendered” her newborn (and on Bastardette) into the Ohio “safe haven” program. Later, she and her mother talked to Columbus Dispatch reporter Rita Price about what had happened According to them, the 20-year old mother agreed to the “safe haven” under the influence of delivery-room medication. She received no counseling and was under the impression that “safe haven was a “Christian adoption program” not an anonymous baby mill. Naturally, officials at Doctors Hospital have refused comment. Last we heard, the mother had gone to court to retrieve her baby. (I am working on a longer piece on this case and ODJFS shenanigans for here and broader publication).

This woman is one of the very few “safe haven” mothers who have been granted a public voice, be it ever so small. Now, we have another voice: Melissa from Michigan.

Melissa sent her story to blogger Baby Love Child, in response to an earlier entry on “safe haven” mislabeling.” While her comments remain on that entry, BLC has also posted them together with a short commentary in a separate entry A Critical Perspective on Baby Safe Haven Baby Dump Programs. Melissa tells us that in 2001 as a panicked teen who had just give birth secretly, she “safe havened” her son in a Westland Michigan hospital with the “help” of an adoption agency. She writes in part: 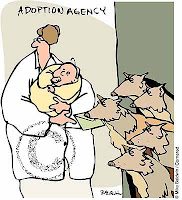 I never had any intentions on throwing my baby in a trash can nor did I want to abandon my baby under such a law but was in shock from delivering a butt breach baby and was terriffied because I hid my pregnancy. The adoption agency I dealt with was evil and self serving and repeatedly tried to talk me out of filing for custody telling how I would regret my child and it would ruin my life which none of that is true my son is the best part of my life hes an amazing little boy. Something needs to be done about these laws its being a abused by all people involved and it disgusts me this law was put into effect to keep young women from throwing newborns in trash cans not to circumvent adoption laws among other things its been used for…

To rescind the “safe haven” Melissa and her family were forced into a 5 week legal battle full of dirty adoption agency tricks. Basically, they were able to “buy” back her child from the state and the agency for about $20,000 in legal expenses. The kicker: the agency turned around then and tried to sue Melissa for ITS legal fees. Melissa does not name the agency, but I can think of a couple of prime suspects up there.

This is an important story and I hope you all read it. It sounds way too familiar.

Thank you Melissa for telling the truth about state baby dumping!