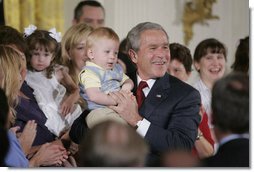 In April, Bastardette attended “Defrosting the Debate: Analyzing the Nexus between Adoption & Frozen Pre-Embryos,” a 1-day conference at the Center for Adoption Law and Policy at Capital University Law School in Columbus, Ohio. The conference gathered legal scholars from across the country to discuss assisted repro law and policy. Among topics covered were the legal status of pre-embryos and their “parents,” how different countries deal legally with pre-embryos, and ethical considerations associated with children whose adoptions stem from assisted reproduction–including those “adopted” as embryos–so-called “Snowflake Babies.”

I was especially interested in the ethical implications of embryo “adoption” (which is not adoption but a property transfer) and the right to identity and heritage. With the exception of one panel member who shared my concerns, the idea that the parents of “adopted” embryos would never get around to telling their now fully realized kids the truth of their “adoption” much less their “creation” seemed ridiculous to them. “Of course, they’d tell them! Why wouldn’t they?” was the reply. When I reminded the panelists of traditional secret adoption practices and the LDAs (Late Discovery Adoptees), one “liberal” panelist replied, “That doesn’t happen any more.” Talk about falling down the rabbit hole!

On July 18 President Bush vetoed HR 810 which would have authorized publicly funded embryonic stem cell research. That afternoon, in the East Room, Bush justified his “culture of life” veto by surrounding himself with showpiece”Snowflakes,” who he said had been” “blessed” through embryo “adoption.” Pictures of Bush with cute kids were sent around the world.

There has been much press and blogging about the veto, subsequently upheld in the House, regarding the negative effect the Bush’s decision will have on scientific research. This coverage has potrayed “Snowflakes” as nothing more than a clever prop, a photo op, a sideshow, something incidental to the veto. But “Snowflakes” ARE central to the veto. Ethical adoption, identity rights and the future of stem cell research are all serious concerns to be sure. But, the deeper and darker repercussions of embryo “adoption” are even more serious: Christian Eugenics, the politicization of science, and the increasing state attack against self-ownership and determination–the view that people are the state’s natural resource to be created and manipulated for whatever purpose it sees fit.

Fortunately, Lauren Sabina Kneisly addressses this very issue in her excellent dKos diary: “Stem-Cell Veto, “Snowflake”, Kids, and Christian Eugenics.” With Sabina’s permission I am posting the “above the fold” here. It’s a long but important article Go to the link at the bottom for the entire diary. Be sure to read the “comments” at the end, too, where Sabina elaborates on some of her thoughts and brings up even more questions with no discernable answers in the near future. 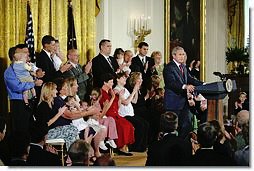 Ok, so why were there kids as the backdrop setting for Bush’s remarks following his veto of the stem cell research bill? Because these kids are not merely cute props, they are emblematic of, and the end product of one particular corner of the so-called ‘culture of life’ that Bush and his allies are attempting to remake America intoThese kids, in evangelical adoption parlance, are referred to as “snowflake children”, so named after the “Snowflake Embryo Adoption” program of Nightlight Christian Adoptions. Bush, thousands of couples’ frozen embryos are not their individual genetic material to make their own decisions about. No, the cryogenically preserved embryos, to Bush, constitute a unique national resource. One which must be appropriately handled and appropriated, a national resource in a zero sum game tug of war between stem cell research and thousands of potential snowflake children reparented into couples deemed appropriately Christian. 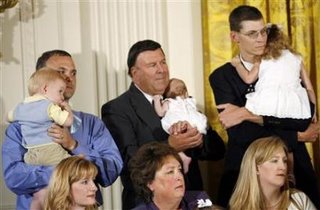 SIDENOTE:
Two National Council for Adoption agencies, Nightlight Christian Adoptions and Bethany Christian Services do embryo adoptions. Nightlight is the pioneer in the field and has been hyped for several years by James Dobson. Persnikity Bastardette wonders where NCFA stands in all this. A few years ago the late Dr Pierce told me over soup and salad at La Tomate in Dupont Circle that he opposed embryo adoption. “Thaw ’em out, give ’em a decent funeral, and bury ’em,” in his words. This was not what I expected to hear from the high honcho of adoption. Not that I expect the current NCFA adminstration to follow the opinions of its founding president, but I’m curious….If NCFA would like to reply here (and I know ya’ll read Bastardette!) I’d really like to know. As would my readers.