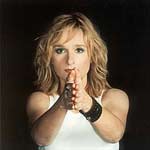 You know, I liked you–a long time ago. I could listen to Like the Way I Do for hours with a certain somebody in mind. Bastardette won’t go into detail. Mr. Wunnderful is long gone, but not forgotten. It made no difference that you were singing about a woman– which he wasn’t. That song was hot.

But somewhere along the way–I guess when Julie Cypher dropped into your life– you went from rocker to schlocker, and it’s been downhill ever since. (Does anybody but the softball team buy your records anymore?) Your yabber in today’s Music Contact.com announcing that your new twins Johnnie Rose and Miller Steven don’t need to know their genetic heritage really nails the door shut:

We really only need Tammy and me to be parents in this. I feel very confident in us as parents.” Michaels adds, “We are not going to be on the cover of a magazine going, ‘Oh, the donor is George Clooney! We don’t know who the donor is. “We don’t want to know. We’re in a lesbian relationship. It’s two moms, period.”

This is not a gripe about your idyllic lesbian relationship, Melissa. Or your ability to parent. Nobody but wingnuts cares about that. Good for you. You go girlfriend….. But, nobody forced you to out David Crosby on the cover of Rolling Stone. You could have kept quiet. (Trust me, it’s not that difficult to keep personal information to yourself.) Your mouth ran on overdrive. What did you expect would happen?

Now your run in reverse, refusing to tell the world who the twins’s father is (which is the ethical thing to do and what you should have done with the first set of kids), but you’ve fixed it so that the twins themselves will never know who their father is (which is not the ethical thing to do). I hope you and Tammy can afford the therapy bills when they come due. And a lifetime membership in Baster Nation.

Nobody claims that the sperm donor needs to take an active part in your twin’s lives, but those children carry that man’s genes and heritage. I know it’s a stretch to comprehend as you and Tammy loll in your la-la-land of fresh baybeehood, but some day those kids will want to know where half of themselves comes from. They might even need their father if they get sick.

I am sure you are a fine parent, Melissa, but you are not the twins’s father. You two need to get over yourselves! You could have used an identified donor. You could have given those babies the dignity of having an identified father. The identity of their father is their information, and their birthright, not yours. Not Tammy’s. How will you explain to them that you stole it? What will you tell them? It’s all about me?

PS–George Clooney is happily childfree and intends to stay that way. You give yourself too much credit to think that he would share his sperm with you and Tammy for your noble experiment in fatherlessless genetics.

6 Replies to “SELFISH BOW-WOW: AN OPEN LETTER TO MELISSA ETHERIDGE”